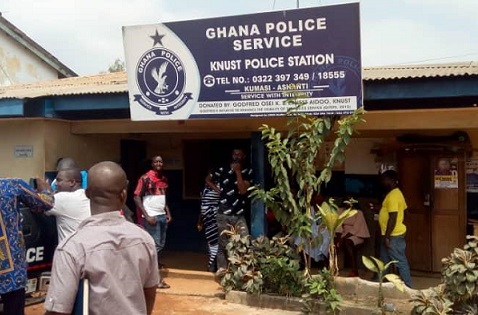 Eleven students of the University Hall (Katanga Hall) of the Kwame Nkrumah University of Science and Technology (KNUST) have been granted bail by the police. The students were arrested last Friday night for “illegal assembly and violent behaviour”.

University authorities had warned the students against organising the famous “Friday night moral” gathering because previous events had turned violent.

In spite of the refusal of the hall management to grant them permit for the gathering, they went ahead, after which two of them were picked up by the police.

That initial arrest was met by a spontaneous attack on the police with the throwing of stones and other offensive missiles, leading to the arrest of nine more; they were all kept in police custody.

The University Relations Officer, Mr Kwame Yeboah, told the Daily Graphic yesterday that no charges had been pressed against the students as of now, as the school was yet to take any decision on them.

“We will conduct our independent investigations while the police do theirs,” he said.

The university has been reluctant in granting the students permits to organise the “moral” programme since the hall was converted into a mixed facility.

Over the years, the Katanga boys had clashed with their rivals, Unity Hall, during such programmes, which normally travel deep into the night.

Following the incident, there has been uneasy calm on campus as both the university’s internal security and KNUST Police have increased their presence on campus.

That, however, has not disrupted the school’s activities as students were seen going about their normal studies.