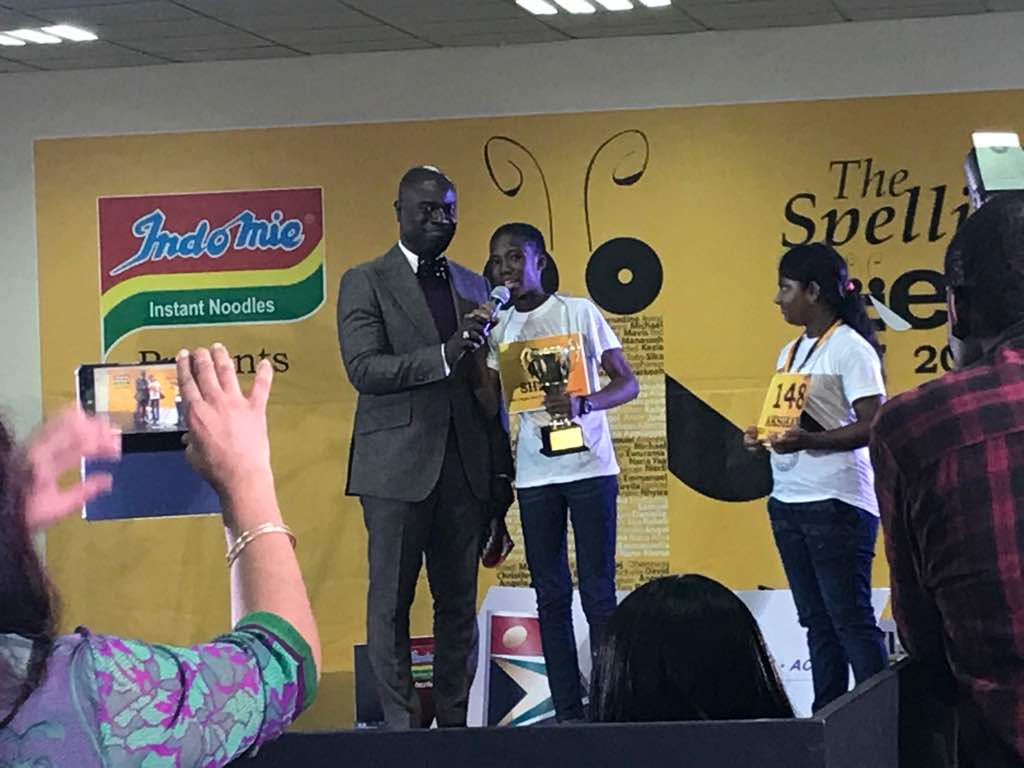 Shifa Amankwa –  Gabbey, a 12 year old student of Nagie’s School in the Ashanti Region spelt the word ‘Wamara’ in a defining moment to emerge as national champion at the 2018 Spelling Bee Competition.

197 spellers gathered for the National Finals of the competition after over 800 students were trained and taken through the elimination processes. The event took place at the Accra Digital Center on the 3rd of February 2018. The spellers were drawn from the Central, Eastern, Northern, Volta, Ashanti and Greater Accra Regions of Ghana.

After the first and second rounds, 90 spellers made it to the third round which was the elimination stage. By the end of that round and the fourth, there were 11 spellers remaining. These spellers were from Jack and Jill School, Phiga School, Nagie’s Angel Educational Centre, Ridge Church School, SOS Herman Gmeiner School, DPS International Basic School and the University Basic School.

At the end of the fifth round, there remained 7 Spellers; 5 from DPS, 1 from Nagie’s Angels Educational Centre and 1 from Phiga School. By this time, the competition had gotten very fierce. Parents were on their feet with their hands over their mouths, teachers were anxious and the whole room was quiet. Those who couldn’t stand the heat stepped out. There was a short break where the top 20 spellers of the day were awarded with medals. The sixth round then began. 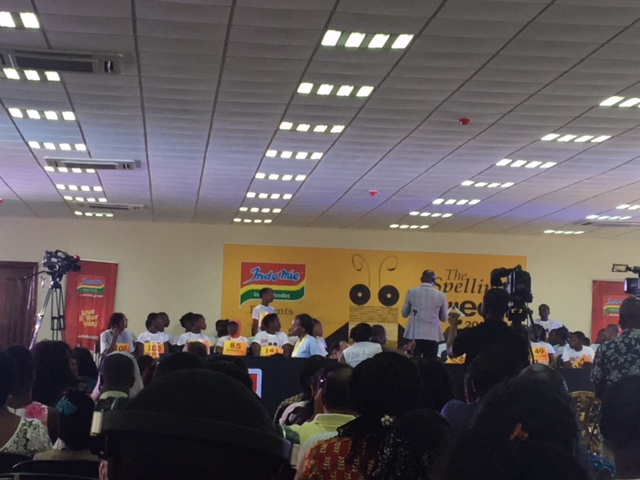 After spelling the words POTTO, DRUMLIN, PORTCULLUS, DECUMAN, GLOUCESTER, PYROCLASTIC wrong, in most cases, missing it by a letter, Phiga School and some of the spellers from DPS were out of the competition.

The competition was gradually coming to an end as there were now three spellers remaining on stage; 2 girls and a boy.  The first lady, Shifa of Nagie’s Angel School had the word, “ALLUVIUM” which she spelt correctly. Akshaya from DPS had the word “TUILLE” which she spelt as, “TWEEL”. Speller 155, Raj, the only boy left in the competition had the word, “ELUTRIATION”. He spelt it as such; “ILUTRIATION”.  Raj and Akshaya and mispelt their words putting Shifa in the lead. 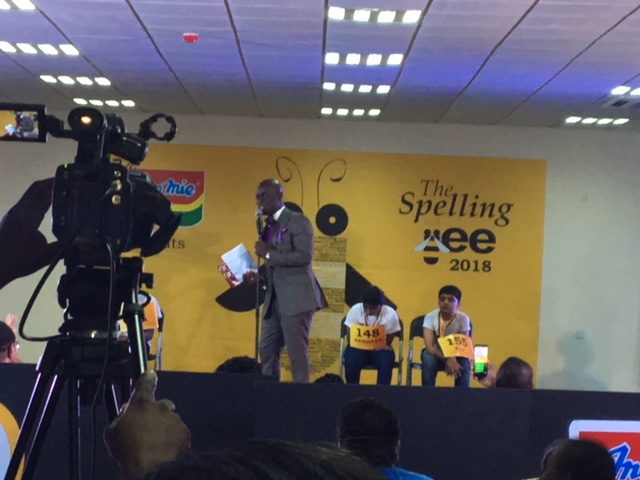 At this stage there was loud applause from the team and audience from the Ashanti Region and even those from other parts of the country. Shifa had gotten into the championship stage. This meant that, she was to be given the championship word to spell. If she spelt it correctly, she was the champion. If she mispelt it, Raj and Akshaya had a chance back into the competition for the battle to continue. Was Shifa going to spell the word correctly to emerge as champion of the 11th edition of the Spelling Bee Competition or miss it and the competition continues?

The championship word was ‘WAMARA’, which is a type of wood from a South American tree. Shifa took her time to produce the letters, W-A-M-A-R-A and it was right!  Shifa from Nagie’s Angel, Kumasi emerged winner of the competition.

After shedding some tears of joy while her parents and teachers hugged and screamed in excitement, Shifa was given the floor to address the audience. She was grateful to God, her parents, her teachers, her trainers and when asked how she felt, she said she was happy and shocked to have won because all the other winners had tried once or twice before finally winning. This was her first attempt so even though she had prepared, she did not expect to win.

For her prize, she received an SAA return ticket to Washington D.C to represent Ghana at the 91st Scripps National Spelling Bee, GHc 5,000 scholarship from Indomie + USD 500 per diem, an engraved trophy,  a fully installed Explora Decoder with 6 months subscription from DSTV, a one year sybscription to Merriam- Webster Unabridged Online Dictionary, A Samuel Louis Sugarman Award, GHc 1000 voucher from Blue Knights Bookshop and some Imdomie and Voltic Products.

Raj from DPS took second place and won  for himself, a return trip to South Africa,  a GHc 2,000 cedis scholarship from Indomie, a package from DSTV, a one- year subscription to Encyclopaedia Britannica Online Premuim,a GHc 800 voucher from Blue Knights Bookshop and some Indomie and Voltic Products.

For placing third, in the Bee, Akshaya won a  return trip to South Africa , GHc 1,500 cedis scholarship from Indomie, a package from DSTV, a GHc500 voucher from Blue Knights Bookshop and some Indomie and Voltic products .