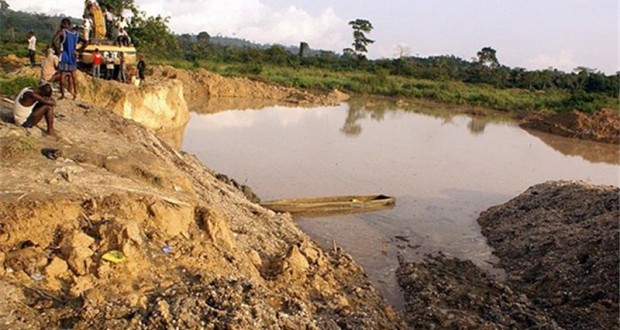 A 20-year-old final year student of Osino Presbyterian Senior High School in the Eastern Region Kelvin Asiedu has drowned in an abandoned galamsey pit at Osino. The abandoned pit which is about 18 feet deep has for months been a recreational centre for wee smokers and recalcitrant youth who go around to swim and have fun.

Information available indicates that Mr Asiedu went to the abandoned pit with a colleague to swim around 2pm on Thursday after his mock exams.

The deceased is said to be a boarding student but has moved out of the boarding house at the blind side of his parents.

It is unclear how Kelvin got drowned in the pitch but one of the rescuer’s, Kwame Boamah explained what happened. He said around 2 pm they heard that someone had drowned, but they did not believe it because there have been instances of such reports in the past which ended up being false.

According to him, an hour later, some of them decided to pass by the area to ascertain the veracity of the information. The sight of onlookers at the bank of the water confirmed their worst fear. “Libation was poured around 7 pm before we mounted a search for the body,” he said.

The family of the deceased is angry with the school for ignoring its responsibility. The deceased’s aunt, Adwoa Asiedua, who expressed her disappointment over the school’s negligence said every term, she pays for boarding fees. However, headmistress of Osino Presbyterian Senior High School, Silvia Aboagye confirmed that Kelvin is no longer in the boarding house.