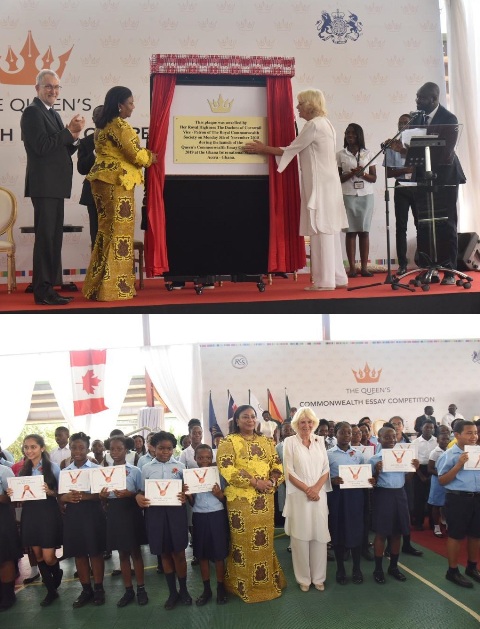 The Duchess of Cornwall, Camilla has launched the 2019 edition of The Queen’s Commonwealth Essay Competition at the Ghana International School in Accra.

The Duchess of Cornwall did the unveiling of the Competition jointly with the First Lady Mrs Rebecca Akufo-Addo and Mr Greg Munro, Director-General, Royal Commonwealth Society (RCS).

The Essay Competition was founded in 1883, which makes it the world’s oldest international competition for schools.

The competition is open to nationals or residents of all Commonwealth countries and territories.

Residents of non-Commonwealth countries whose entries are submitted through their local RCS branch are also eligible.

Entrants must select a senior or junior topic depending on their age on 1st June 2019.

The Duchess of Cornwall, who is also the Vice-Patron of the RCS, lauded Ghanaian students, who had successfully participated in the 2018 edition of The Queen’s Commonwealth Essay Competition.

“I can now reveal that this year’s subject is ‘a Connected Commonwealth’ a fascinating topic. And one which I hope will get your brains wearing. Last year about 12,000 young writers sent in their stories, poems and essays. Nearly 1,000 entries were from West Africa. So it is a huge pleasure to see some of those winners here amongst us today,” she said.

“We all very much hope that a record number of young people from all 53 Commonwealth countries will be inspired to put pen on paper and enter next year’s competition,” she added.

The Duchess of Cornwall said as a passionate believer in the power of the written words, she looks forward to presenting awards to winners of the Competition at the Buckingham Palace in London next year.

Mrs Akufo-Addo said she was glad that the number of Ghanaian students who won gold, silver and bronze medals in the competition this year had increased by over 350 per cent compared to 2018.

“In particular, I would like to recognise the achievement of Roman Ridge School, which had the highest number of awards of any school in Ghana,” she stated.

“But I also want to commend all Ghanaians who took part in the Competition – whether you won or not – for being trailblazers and leading the way towards Ghana’s bright future.”

She said the Queen’s Commonwealth Essay challenged their students with questions about the bigger picture, all the while ensuring that the underlying truth of their unity through diversity became impossible to ignore.