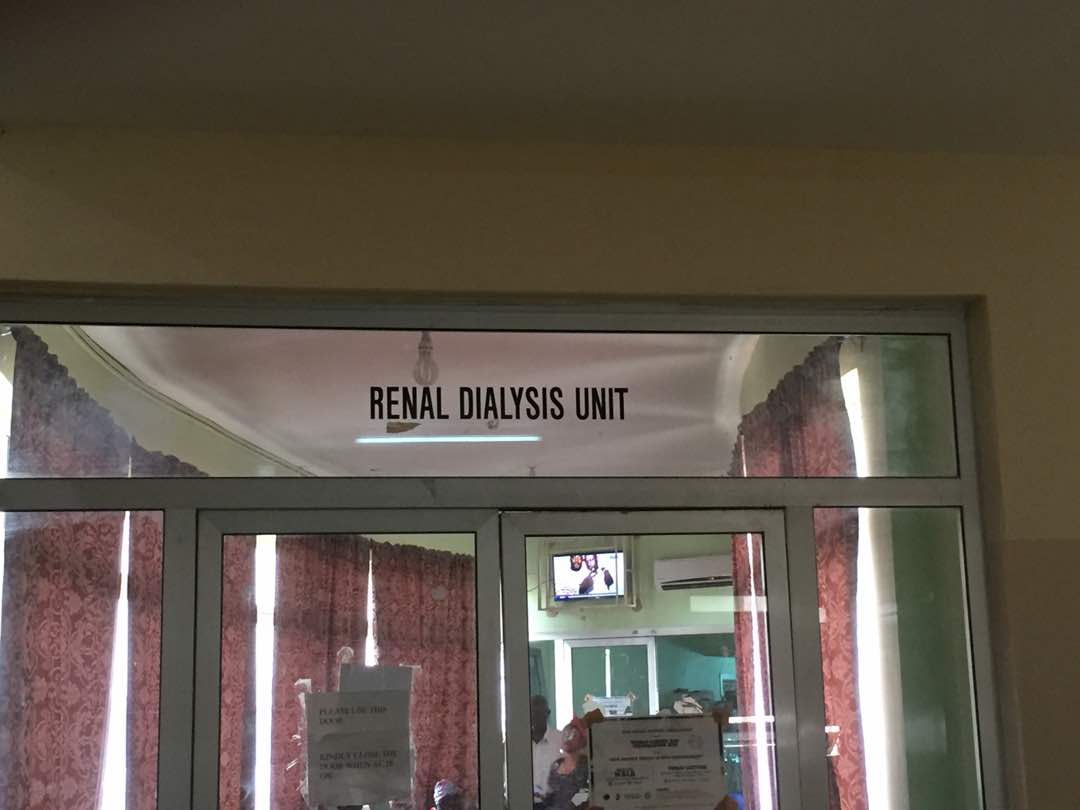 I got to the Dialysis unit, which is on the first floor of the Medical Block at 7:20am. The waiting area was full. I could feel all eyes on me as I walked into the room. I said good morning and was surprised at the hearty response I got in return. I was not expecting that because I thought the people were too busy minding their own business or ‘thinking about themselves’ as it’s usually put.

I came back and sat on the only seat I could find in the area.

The doctor I had come to see was at the morning’s meeting, so I had to wait. To keep myself busy, I was catching up on the day’s news on some online sites when a loud laughter distracted me.

It came from a woman who looked ill- thin, swollen faced, swollen feet and other symptoms I cannot describe properly, and that is why I was surprised that she found the strength to laugh. So I began to pay attention to the conversation going on around me.

Ruth, the lady who laughed earlier asked Mr Antwi (another patient) what he would eat before the session. He opted for Mashed kenkey and Sugar bread and reminded her that he did not want coconut bread.

A young man walked up to Ruth and asked her what she would have. She ordered rice with vegetables, an egg with just a little sauce.

It was an unusual scene because they were behaving like family and not as people who had come from different places to seek medical attention. They cared for one another. I was invited to their meals but I politely declined.

Ruth reminded Mr Antwi and Mr Johnson that her birthday was in a week’s time, so they needed to get her a gift.

Another lady, clearly new, screamed occasionally in pain while holding her head. She was asked not to shout because it was only going to aggravate her pain. They advised her to go see Mary, a nurse for her BP to be checked.

They know the names of the nurses too? I thought.

The lady confirmed that her BP had been checked. A.B, an orderly was asked to bring her a bottle of water so she could take her medicines. When he did not return after some minutes, Ruth stood up to go and get the water. As the lady brought out a 5 cedi note to pay, Mr Antwi handed Ruth a 1 cedi note for it.

On Ruth’s return, Mr Antwi asked her why she was panting that much after a short walk. ‘I don’t know, but that is what happens these days when I walk, so I do not walk much lately. I should see Dr. Kwakyi because my HB level is fine, so I don’t know why I should struggle to walk and pant the way I do”.

“You will be fine”, another lady said.

A younger lady came out and they exchanged pleasantries. She found a corner to stand and engaged her friends.

She also announced that she will be going for a funeral over the weekend at her hometown.

The conversation then drifted into funerals and how their extended family had written them off because of the kidney challenges they were facing.

Mr Antwi said some of these family members in question have passed but he is still living. Ruth affirmed and said same in her case.

The young lady said that some of her mates told her to drop out of school because she may die and leave her degree behind, while others said she was unfit to even learn to make good grades. ‘But I finished and some of them are still resitting some papers’, she said.

Ali, who sells newspapers walked straight up to Mr Johnson and gave him a pack made up of the Daily Graphic, The New Crusading Guide and the Business and Financial Times Newspaper. Mr Johnson paid and queried Ali for coming late.

Comfort said she met him downstairs chatting with a fine lady who may have distracted him and got him to lose track of time. They all laughed.

Ruth said she was going to have her hair washed at the salon nearby. ‘You ladies can worry yourselves. Your hair is nice as it is’, Kofi said. ‘I should look nice all the time or madam, what do you say?” Ruth questioned.

The question was to me. I smiled and said it was necessary to look good so she should do as she pleases and not mind them. She agreed with me.

She then told me not to worry and that no matter what my situation is, I will be fine. ‘They have been battling this for years”, she added.

“What at all are they discussing today? the meeting has taken too long” said Mr Johnson.

A nurse whom I realised had been on leave walked in and was received with cheers.

Someone teased that she left thinking two weeks was such a long time but there she was. She in return asked how they were all doing before going into her office.

A gentleman came in after and looked confused. Ruth asked who he was looking for and the man said, ‘I’m looking for Dr Boahema’. ‘It’s Dr Boamah. He is in a meeting so just stand here. They will be done very soon’, Ruth said to him.

And soon, the morning’s meeting was over and the doctors came out. I went into the consulting room to see Dr Kwakyi.

He told me how stressed the unit had been and how frustrated that left him.

Then he said he needed to learn to speak French because he felt sad and disappointed at himself when patients from Francophone countries came and he couldn’t communicate with them.

He was prepared to take classes, so he would be more ‘efficient’ at what he does.

I laughed. After chatting a while, I noticed he had a cold. Due to the stress at the unit, he could not take time off to heal.

I told him Ruth was coming to see him about her breathing issue. He smiled and said his patients really worry him but he will see her even though Wednesday is the official clinic day.

What were you complaining about again?

You can’t afford a smile because you have a headache?

You are ill, so you can’t help another ill person?

You aren’t paid well so you can’t do any extra work even if it will save a life?

You have lost hope because you are not where you planned to be?

You have given up on life?

In 30 minutes, I was reminded of the following:

Think again. There are people who manage to laugh even in pain and that’s the little spice that keeps them going.

Don’t despair. What doesn’t kill you makes you stronger.

Be grateful. There are little things like sweating and urinating that someone is struggling to do.

Be nice. Your smile or warm greeting can soothe someone’s wound .

Be appreciative. I appreciate Dr Kwakyi, Dr Boamah, Dr Abubakar and all the other nurses and orderlies who make the unit as welcoming and relaxing for their ‘patients turned workers’ and friends. Your reward is in heaven, but I am hopeful that you will receive them on earth too.

Apart from that of the doctors and orderly, all others are not their real names.

When I thought it was far from me, it sort of caught up with me
EXTRA CLASSES IS NOT FOR EVERY CHILD
FUNNY CHILDHOOD MYTHS I STILL HOLD ON TO AS AN ADULT
CARING FOR A CHILD WITH DISABILITY; IMPORTANT TIPS TO HELP YOU OUT
If I Could Turn…
A PANAGYRIC TO VEAKj
What a 'pressure-induced-marriage' cost me
My Daughter and I
HE DIED FROM AIDS-DID I CONTRIBUTE TO HIS DEATH?
COVID-19: A FEW TIPS ON HOW TO WORK FROM HOME