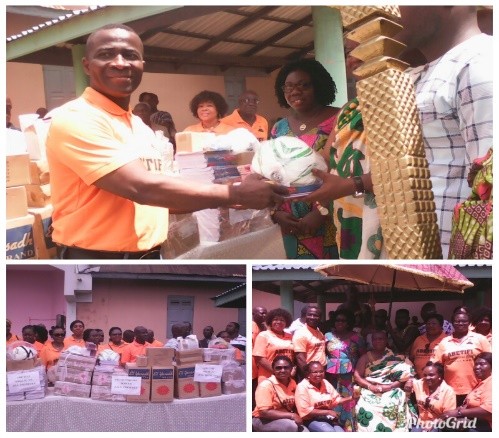 The Abetifi Youngsters Club in Holland has donated educational materials worth £3,000 to schools in Abetifi as part of their social responsibility programme in promoting quality education in the area.

Among the schools that benefitted were the Abetifi Practice Primary, Abetifi D/A Basic School, Presbyterian Primary and JHS, Anglican D/A, and the Roman Catholic Basic schools.

At a short ceremony to hand over the items to the beneficiary schools, Mr Edward Anim Boateng, the Chairman of the Club, said the gesture was to help increase enrolment in the schools so as to ensure quality education delivery.

Mr Boateng said the Club would include private schools in the area in their next donations to ensure equity.

He said the association was poised in carrying out development projects in the Abetifi community and beyond in the fields of health, education and other social services.

Mr Boateng said apart from education, the Club had supported the renovation of the delivery ward of the Abetifi Health Centre and donated furniture to the Atibie Government Hospital.

To curb open defecation in the community, Mr Boateng said the association had constructed an eight- seater toilet facility for the community.

He therefore assured of the Club’s readiness to support the wellbeing of inhabitants in the area by frequently donating to schools and institutions.

Receiving the items on behalf of the schools, Madam Ivy Asantewaa Owusu, the Kwahu East Education Director, thanked the association for helping to provide quality education delivery in the District.

She expressed worry about the high rate of teenage pregnancy facing the District and entreated parents to encourage their wards to learn after school hours to help reduce the immoral activities among them.

Ms Owusu therefore pleaded with the traditional authorities in the area to ban school children from roaming about after 6pm and explained that such action could help reduce the teenage pregnancy menace in the area.

Akyemfour Asiedu Agyemang III, the Chief of Abetifi and the Adontenhene of the Kwahu Traditional Area, commended the AYC for the gesture and encouraged them not to relent on their effort in providing support to the community.

He therefore entreated the youths at home and abroad to join the club to help lift the image of the association to a befitting level.