Accra Floods- Are we Victims or Culprits 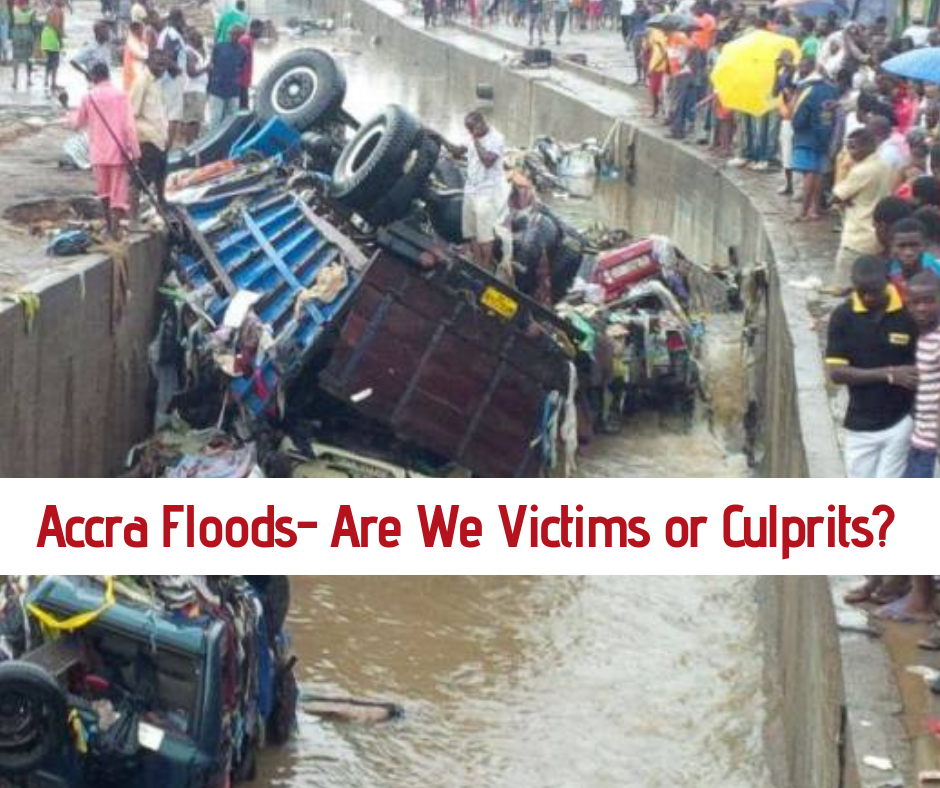 As a parent, I am concerned about of the future of my children in our dear country, so permit me to pen down my thoughts on one of Accra’s peculiar problems: floods.

In the past week, we have experienced rains in Accra with the last one on Monday lasting for about an hour. As typical of Accra, some parts of the city got flooded. Though the property of some people were affected, including the home of former presidential aspirant, Hassan Ayariga, thankfully no lives were reported lost. It was devastating to see videos and pictures of drains overflowing, homes flooded and vehicles submerged in water. Not to forget the embarrassing footage from the new terminal of the Kotota International Airport showing some workers sweeping water from some parts of the terminal with brooms.

So are we victims of the floods or we have played a role in this situation?

The issue of Accra still getting flooded especially after four years since the June 3 fire and flood disaster baffles me. Commitments made by both the previous and current governments to take swift measures to ensure that such a tragedy does not occur, are not happening as swiftly as they made those commitments.

Sadly, I believe that we are a reactive people. We wait for the disaster to occur, then we react. I sadly recall the lives we have lost so far this year in the rains that fell a couple of weeks ago. For that reason, I can only shiver and imagine which one of us may be the next victim(hopefully not).

It is about time that proactive efforts are made to reduce flooding in the capital as much as possible. I am not an expert but I know some of the things that result in floods in Accra include:

2. Poor sanitation– Ghanaians are a major part of the problem of flooding because of the improper sanitary practices of the average Ghanaian. In this case, citizens and the government, specifically the Sanitation Ministry need to see to the fact that rubbish is not damped anyhow, especially in or around drainage systems.

3. Poor drainage systems– Whenever I see the Odawna ‘river’ being drained, I shake my head in disappointment, not just because it is being desilted, but because I wonder why government always waits until the rainy season to intensify desilting of the drain. Mostly importantly, the desilting exercise will be in futility if people do not stop dumping rubbish in those areas.

I am pretty sure that a lot accounts for the flooding in Accra but these are three of the ones I know and am most concerned about. I do hope that to a large extent, we experience an incident-free rainy season this year, since the Ghana Meteorological Agency has indicated that we should expect more rains in the coming months.

Intensive education and public awareness are needed to educate citizens that the fight against a flooded Accra can never be won by government’s efforts alone. Government on the other hand must be proactive in their measures and ensure that all laws and regulations surrounding building permits, sanitation and generally practices that could promote our safety are enforced.

I do hope that the Accra of today in terms of flooding and poor sanitation is not the Accra my children will grow up to get used to.

0 responses on "Accra Floods- Are we Victims or Culprits"