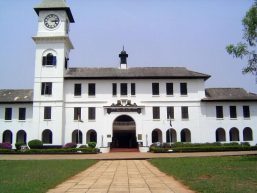 His Excellency Nana Addo Dankwa Akufo Addo, President of the Republic of Ghana will be the Guest of Honour for the 90th Founder’s Day Celebration of Achimota Secondary School on March 4th 2017, as part of the yearlong celebrations of the School’s anniversary.

“You can play a tune of sorts on the black keys only; and you can play a tune of sorts on the white keys only; but for perfect harmony, you must use both the black and the white keys”. This statement was made by Dr. Kwegyir Aggrey as he described the stylised piano-key design of the Achimota School crest. It goes on to explain their motto ‘Ut Omnes Unum Sint’, which means “That all may be one”. The founders believed that, in the context of school life, black and white, male and female, everyone should integrate and combine cooperatively for the good of all.

Motown, as it’s been nicknamed, was founded in 1924 by Sir Frederick Gordon Guggisberg, Dr. James Emmanuel Kwegyir Aggrey and Rev. Alexander Gordon Fraser, but was formally opened in 1927. It has made and is still making impact on the nation in many ways. From its student body and teaching college emerged many notable African personalities, including several Presidents, politicians, academics, scientists, doctors, lawyers, engineers, educators, architects, military officers, diplomats, computer scientists, agriculturists, accountants, artists, business leaders and industrialists. Some of the former presidents the school has produced include Dr.Kwame Nkrumah, Edward Akufo-Addo, Jerry John Rawlings, the Late John Evans Atta-Mills. Other Presidents include Robert Mugabe of Zimbabwe and Sir Dawda Jawara (first president of The Gambia).

Music has always played a very important part in the life of the school. Achimota’s achievements in attaining a high standard in this field led to the establishment of the Ghana National Symphony Orchestra and the Department of Music and Performing Art Education at the University of Education, Winneba. From its inception Achimota placed special emphasis on the value of the use of one’s hands in agriculture, technical and vocational. Achimota has concerned itself to set a standard of excellence in whatever field of education that meets the national needs.

The yearlong anniversary celebration began with a Health Walk by both Old and Current students of the school. Other activities to follow include a Flag Raising Ceremony with old and new students; Monthly Symposium dubbed: “Achimota Speaks,” which will include a series of various topical areas drawn from the theme of the anniversary; Founders’ Day scheduled for March 3, 2017 to March 5, 2017 at the school (administration court), this is to be preceded with Bonfire; Parade by the School’s Cadet Corps and a Durbar.

In June, the School will have an inter-school games, an Opera stage play spearheaded by the old students, home coming in November to showcase the creative and innovative works of the students and climax the celebration in December with a dinner dance.

There is also a construction of a new science laboratory as part of the Old Students’ Association’s corporate social responsibility to give back to the alma mater for instilling in them knowledge and skills to be productive in life.