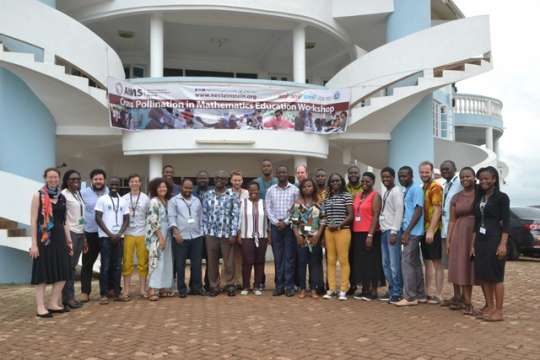 Mathematics educators in Africa have attended workshop on cross pollination in Ghana.

At the workshop, Mr David Stern, Founder of Innovations in Development, Education and Mathematical Sciences (IDEMS) UK, has lauded the government of Ghana for introducing free Senior High School (SHS), education saying, it was a step in the right direction.

“A change into free secondary school education is a big step into removing barriers. We can tell you in Ghana, the biggest barriers used to be going from secondary to sixth form, that is where we lost most students in Ghana in the past,” he stated.

He was speaking at the opening of a five-day Cross-Pollination in Mathematics Education Workshop for mathematics educators in Africa, which opened in Biriwa in the Central Region of Ghana.
The workshop is aimed at providing a platform for educators from across the African continent to discuss the implementation, sustainability, scalability, impact, good practices and challenges for a range of mathematics education initiatives.

It is being organised by the African Institute for Mathematical Sciences Ghana (AIMS Ghana), Africa Maths Initiative, Ghana (AMI-Ghana), IDEMS International and Supporting Africa Mathematics Initiative (SAMI).
Participants were drawn from fifteen Institutions from eleven African countries with other invited participants who were in the position to play key roles in initiating, scaling and expanding future initiatives.

They are made up of a team of local and international teachers, scientists, researchers, community leaders and practitioners who have long-term involvement in mathematics education initiatives across the continent.
They would also use approaches related to theory of change with pathways to impact on the experiences drawn and beliefs of the participants to build continued collaborations for sustainability.
“The fact that secondary education is freely available, you lose part of that barrier, not all of it anyway,” Dr. Stern added.

He noted that most people were often denied access to university education because they failed in mathematics, stressing that the workshop was aimed at removing such barriers.
It seeks to build a community of education practitioners who were passionate about changing the way mathematics was taught and perceived, in the belief that it had positive impact on the economy and society through the skills being gained.

It would use approaches related to theory of change with pathways to impact to draw out the experiences and beliefs of the participants to build continued collaborations for sustainability, he stressed.

Dr. Franca Hoffmann, Director of SAMI, explained that by bringing such varied actors together, it hoped to achieve a cross-pollination of math education initiatives on a wider scale.
She said participants would be introduced to the theory of change including pathways for impact of mathematics education in a broader context, how to convert existing successes into new scalable initiatives and investigating opportunities of using technology as an enabler for learning and reaching communities.

Dr. Hoffmann noted that the mere teaching of algebra would not necessarily have direct improvement in the livelihoods of an individual but critical thinking skills gained through the kind of argument mathematics presented, would allow an individual to solve real World problems.
According to her, mathematics and Science provided transferable skills that one could extrapolate to solve much more complex problems in society.

“So it is not about learning the content, it’s about learning particular critical thinking skills and learning how to think outside the box and how to solve complex problems,” she explained.

Dr. Hoffmann, a Researcher at Computing and Mathematical Sciences, California Institute of Technology in the USA, said it was important that people learned skills in mathematics and technology to move Africa forward for her to be recognised as a key actor on the global stage in the digital age.

She said India for instance had emerged as an IT giant because of mathematics and science education and stressed that Africa must follow suit to access the global digital market to improve livelihoods.
Dr. Prince Osei, Acting President of AIMS Ghana for his part, encouraged the participants to find best ways of teaching the subject especially at the fundamental level.