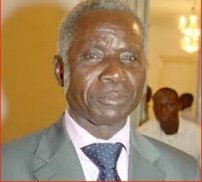 A former Chief of Defence Staff, Brigadier General Nunoo-Mensah, has blamed unemployment for the increasing rate of robbery attacks in the country. According to him, the country’s jobless youth are frustrated. This comes after close to twenty robbery attacks have been recorded in February 2018 alone, leading to loss of lives and property in the country with majority in the capital, Accra.

The former army general has urged government to critically focus on addressing the root cause of the increased rate of robbery, which he said is as a result of unemployment.

“These people are organized; they are not just rampant robbers, they are serious people who are organized, and they know what they are doing so the police need to have good intelligence…I’m saying that they are motivated by the stomach– the empty and the hungry. It is their stomach that is pushing them, they are hungry and I don’t believe that there is any political motivation behind it, I don’t believe it.”

“We must confront the problem, but in the medium to long term, we must tackle the root causes. We have to sit down and think.  We have to take our time and not react to what I call knee jerk reactions. Unless we tackle the main cause it will keep coming,” he added.

Recent incidents of robberies among others include a robbery at Tema Industrial Area which saw a Lebanese man, gunned down, and robbed of GHS 200,000. Homes of some citizens, Forex bureaux and mobile money points have also been major targets in these robberies.

The Inspector General of Police (IGP), David Asante Apeatu, this week announced that the police arrested a group of suspected robbers believed to be behind attacks on about 20 forex bureaux in the Spintex road area in 2018.

Government has said that it’s ‘Operation Calm Life’ initiative, which has seen a collaboration between the police and military personnel providing security in parts of the country, will be given a boost. According to the government, this among other initiatives are put in place to provide security in the country.