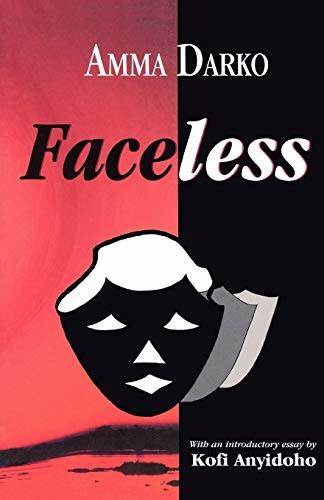 Amma Darko’s Faceless was first published in 2003; she is a Ghanaian feminist writer who has distinguished herself in the Ghanaian literary space. Darko employs prose fiction as a medium to foreground the complexities of the Ghanaian woman’s life in relation to culture and gender. Apart from Faceless, she has authored other equally gripping novels such as The Housemaid, Beyond the Horizon and Not Without Flowers.

The text recounts a story of a young girl who is forced to live on the streets following the failure of her parents to live up to their responsibilities. It is about the unfortunate incidents surrounding Baby T’s death.  Baby T’s mother, Ma Tsuru, is a tragic and helpless character who has been destroyed by the men in her life. She is unable to properly care for herself and her children, leaving the later at the mercy of predators. The women in the text are inflicted with hardship by the male characters who were mostly absent fathers, murderers and rapists.

Faceless depicts a Ghanaian state where leaders have failed in their socio-political governance. It shows how the government and the police system fail its people each passing day. The NGO, MUTE had to open investigations into Baby T’s case because the police authorities who are supposed to maintain law and order and protect the citizens, lacked the necessary logistics due to years of neglect by the government, thus, were not interested in finding the murderer.

The driving theme in the novel is streetism and this is represented by the living conditions in Sodom and Gomorrah, a slum in Accra; it brings to bare the perils of street life and its fundamental issues such as rape, violence, sexually transmitted diseases, broken home, dirt, poverty and illiteracy. Children are left on their own in the streets; they live in unbearable conditions, as well as in constant threat of being raped, physically and sexually assaulted and killed. Due to the experience of parental neglect, poverty and abuse at home, many youth seek comfort in the street. While the boys become delinquents, the girls are lured into prostitution, leading to unwanted pregnancies, unsafe abortions and the contraction of sexually transmitted diseases. Almost all the characters in the novel, such as Baby T, Fofo and Odarley are victims of child neglect and this leads to the children suffering extreme conditions of poverty on the streets.

The details of Baby T’s life are revealed by the author through the accounts of Baby T’s younger sister, Fofo who is also a street child and Kabria, a Programme Officer at an NGO, MUTE. The story is unravelled layer by layer as the mystery behind Baby T’s death is solved. The narrative style is straightforward with doses of the Ghanaian vernacular; she does this to highlight the Ghanaian cultural setting.

Faceless is a significant social commentary on streetism that details the thought-provoking sociological issues of child neglect, child abuse, defilement, reproductive health risks and failed governance through the experiences of these vulnerable street children. It is a must-read.

0 responses on "BOOK REVIEW: A READING OF AMMA DARKO’S FACELESS"