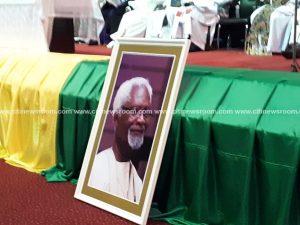 Professor John William Atukwei Okai has been laid to rest. President Nana Addo Dankwa Akufo-Addo, on Friday, praised the late professor’s contribution to the Pan African struggle for independence. The president said as a cultural activist, the renowned poet’s pen was mightier than the sword.

In a tribute at the State Funeral Service, the President said even though he never took up a gun in Africa’s struggle for independence, his pen and voice did the fighting in helping to ensure the liberation of the political and social consciousness of the African.

“The impact of the talent of Atukwei Okai is a classic example of the metonymic adage, “the pen is mightier than the sword.’

President Akufo- Addo said the renowned poet, cultural activist and academic took African poetry back to one of its primal origins.

Commending his great contribution to the Arts and Culture industry, he described Prof. Okai as “an exceptional, great writer, a famous poet who possessed an excellent mastery of languages, whether of French, English, or Russia”.

He was also proficient in the Ga and Twi dialects.

He stated that Prof. Okai’s commitment to the Pan African project, made him to become the long-time Founding Secretary-General of the Pan African Writers Association (PAWA).

As a leader of PAWA, President Akufo-Addo said, the internationally acclaimed poet, used his platform to talk positively about the limitless possibilities of an independent Africa for Africans.

“He was only sixteen when he became a member of the Ghana Writers Association, which, at the time, boasted established writers, such as Michael Dei-Anang, J.H. Kwabena Nketia, Efua Sutherland, Kofi Awoonor, Cameron Duodu.

“Undoubtedly, his association with these accomplished writers brought out the very best in him and made him the writer he became.

“Atukwei’s famous declamations of his poetry were compelling experiences that would never be forgotten by anyone who had the privilege to have listened to him”.

So were members from the fields of arts and culture of national, regional and international repute.

With his poems rooted in the oral tradition, he was generally acknowledged to have been the first real performance poet to emerge from Africa.

The mortal remains of late Prof. Okai would be buried at the new Military Cemetery, Burma Camp.