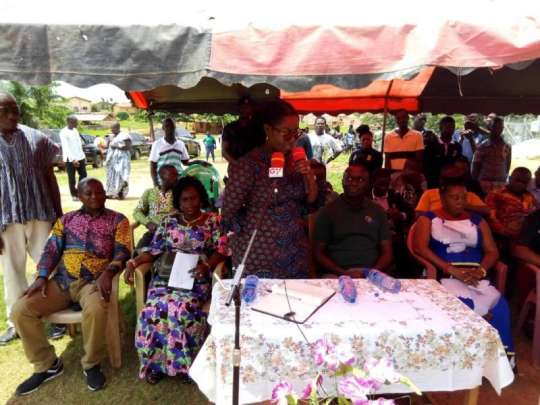 The lack of maintenance of public property despite the investments in those properties is an issue Communications Minister, Ursua Owusu-Ekufful has expressed concern about.

According to the minister, it is a shame as a people to sit unconcerned and allow national assets to rot away and stressed the need for a paradigm shift.

She made the observation after inspecting an abandoned Information Communication Technology (ICT) center at Namong in the Offinso Municipality as part of her three-day working visit to the Ashanti Region.

The centre which was built in 2006 as a community Information Centre (CIC) had been left to rot for the last six years with the entire building in a sorry state.

Virtually all the computers, air conditioners and the server had broken down and the building taken over by an IT officer of the assembly as a residential accommodation.

The situation was not different at Kwamang in Sekyere Central District where all the computers at the centre had been stolen with only the computer desks and chairs left in the building.

The Minister who was visibly irritated at the sight of the facilities could not fathom why such useful facilities could be allowed to go waste in an era where development had become ICT driven.

“We can’t just continue to throw good money away and spend more money to renovate and re-equip the facilities only for people to run them down” the Minister fumed. She said the assemblies had proven not capable of maintaining the facilities hence the ministry would find money to fix them and recruit people to man the facilities.

This, she noted, would inject sanity into the management of the facilities for the benefit of students who required IT skills to drive the Digitized Ghana Project.

She cautioned other government agencies who were forcibly occupying the CICs to vacate as plans were underway to refurbish them for use.

She was hopeful that functional CICs were critical to the registration exercise of the National Identification Authority since they had internet connectivity.

The communities, according to the minister, had a role to play in maintaining the facilities and urged them to resist any activity that could run down the centres.

The minister who was on a three day visit to the region had earlier visited the Kodie CIC in the Afigya Kwabre District where some school children were having lessons in coding.

She also inspected some School Connectivity Projects and Rural Telephony Project (RTP) sites in six communities in the Asante-Akim South Municipality on Monday.