Language Shouldn’t Be A Barrier, Get Google Translate! 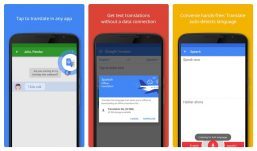 Are you traveling to a foreign country, and at a disadvantage because you don’t understand the language?

Don’t worry, the Google Translate app got you covered. Google Translate is a free multilingual machine translation service developed by Google, to translate text, speech, images, sites, or real-time video from one language into another. Google Translate works on iOS and Android devices; iPhone and iPad users can download it from Apple’s App Store, while Android users can snag it from Google Play. Both versions offer roughly the same features. It supports over 100 languages

Google Translate is able to work offline, that is, work without internet. You can type or write foreign language text or speak it into the app, and the words are translated into your native tongue. You can even point your smartphone at a sign or other text written in a foreign language, and the app displays the translation for you.

The app can translate between 103 languages by typing. Tap to Translate copies text in any app and your translation pops up; the Offline Mode translates 52 languages; Instant Camera Translation translates text instantly in 30 languages; Camera Mode takes pictures of text for higher-quality translations in 37 languages; Conversation Mode is a two-way instant speech translation in 32 languages; Handwriting draws characters instead of using the keyboard in 93 languages whiles Phrasebook stars and saves translations for future reference in any language.

1 responses on "Language Shouldn't Be A Barrier, Get Google Translate!"