DR. KWAME NKRUMAH AND THE MANY ATTEMPTS ON HIS LIFE 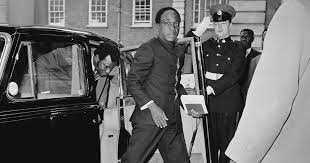 It is public knowledge that in 1968 there was an attempt by some members of an opposing political party to assassinate Dr.Kwame Nkrumah, but did you know that that was not the first time an attempt was made on his life?

According to historical records, there were several attempts made to end the life of Ghana’s first president with each attempt deadlier than the last. Historians claim that a total of seven (7) attempts were made on his life during his time as president of the newly birthed country, Ghana.

The first attempt on his life was on 10th November 1958 in his home with several secretaries and aids present. It is alleged that an unidentified member of the opposition, threw a bomb at the home of Dr. Nkrumah which shook the foundation of the house. Although there was no record of causalities, a few people sustained various degrees of injuries.

The next attempt at assassinating him occurred on New Year’s Eve while he was working in collaboration with some members of the opposition. A police officer in charge of his security accosted Dr Nkrumah and attempted to shoot him. He managed to overpower his attacker by wrestling him to the ground and holding him there on his back until help came, but not before he had bitten him on the neck.

The deadliest of all the attacks on his life occurred in August 1962 when he visited Kulugungu near Bawku while returning from meeting the president of Upper Volta (now Burkina Faso), Maurice Yameogo.

Sydney Abugri recounting the events in his article on Ghanaweb.com stated that He(Dr Nkrumah)  had descended from his car to receive a bouquet from a schoolgirl when a bomb was hurled at him.

“We were still standing around in Gingande (a suburb of Bawku) with our national flags waiting for his return when the dispatch riders raced back shouting in Twi, that Nkrumah was dead”, he said in his article.

Abugri also recounts other bomb explosions which had occurred on 7th July, 1961. According to his account, one wrecked Nkrumah’s statue outside Parliament House. Two bomb attacks in August and September 1961 failed to kill Nkrumah. One exploded in a crowd outside Flagstaff House on 2nd September 1962, killing one person and injuring 63 others, as Nkrumah’s enemies persisted with the attempts to kill him.

In 1964, a statue was erected near Bawku in remembrance of the attack on his life in August 1962. He eventually came up with the infamous “Protective Detention Act” (PDA) to arrest and detain elements suspected of trying to kill or overthrow him as a measure to curb the attempt on his life.

He was eventually overthrown in a military coup 1966 while he was away on a peace mission in Vietnam on February 24, 1966.

EMPOWER GIRLS AS WELL AS BOYS- THE MINISTER OF SANITATION AND WATER RESOURCES
ASAMANI THE AKWAMU CHIEF WHO ONCE RULED THE CHRISTIANSBORG CASTLE FOR ONE YEAR
SCHOOLS ARE NOT REOPENING IN SEPTEMBER - MoE
WAEC introduces tough measures against examination malpractices
University of Ghana Ranked Among World’s Top Universities
Man Remanded For Having Sex With His Ten-Year-Old Daughter
GHANA GOVERNMENT CUTS SOD FOR A CREATIVE ARTS SCHOOL IN KWADASO
HURRAY! THE ACHIMOTA SCHOOL IS 93 YEARS TODAY!
BECE Candidates in Tema Prepared for Exam
The latest Android devices now let you log into apps without requiring a password

0 responses on "DR. KWAME NKRUMAH AND THE MANY ATTEMPTS ON HIS LIFE"