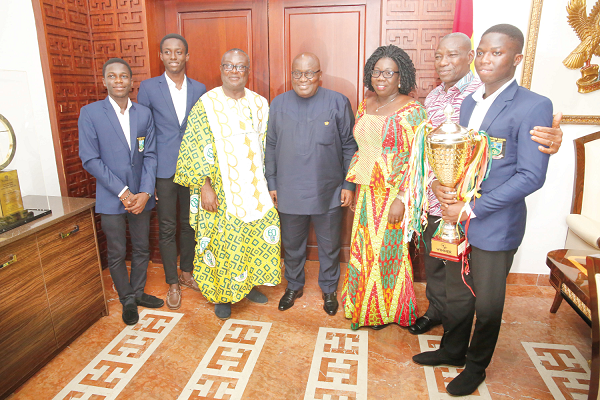 Following the victory, the winning team took a trip to Portugal, where they participated in an international quiz.

President Akufo-Addo commended the students for exhibiting excellence and commitment to their studies, which he said enabled them to clinch the ultimate in the highly contested national competition.

He was particularly impressed with the leadership qualities of Master Kwaku Annoh Kissi, who led the team to victory.

The President announced that the Ministry of Education had commenced processes to reform the curriculum of schools to ensure the infusion of more practical teaching and learning.

He explained that the targeted outcome of the review was to ensure that students did not only appreciate the theoretical aspects of the various disciplines but could equally put to practical use the knowledge they acquired for the progress of the country.

Briefing the President, Master Kissi called for improvement in the country’s educational sector to match up with what pertained in the developed world.

That, he explained, was critical because the competition in which they took part in Portugal exposed the shortfalls in the Ghana educational system.

According to him, while the students they competed against demonstrated hands-on practical experience of what they had been taught, the story was not the same for him and his colleagues from Ghana.

Master Kissi said it became clear that in Ghana the educational system was overly focused on theory.

As a result, he said, even though they were very conversant with the theoretical aspects of the competition, they were found wanting when it came to the practical application.

“We don’t really understand what we study; we can explain everything, describe everything but we cannot apply anything to everyday situations,” Master Kissi pointed out.

He said over-emphasising theoretical education was the bane of Ghana’s educational system and expressed the hope that a review would shift the system towards more practical teaching and learning.

He said that would position students to apply the knowledge they acquired for the development of the country.

Master Kissi commended the government for the introduction of the free SHS policy, which he said had given more students the opportunity to further their education.

He commended the St Peters’ Old Boys Association and the Primetime Limited for their support to the team.