ERADICATING POVERTY OF THE MIND

Usually, when the word poverty comes up, it is used to refer to the lack of sufficient possessions for a person’s needs but metaphorically, I believe that the word has non-economic connotations as well.

Thus, a person can have sufficient possessions and still be poor because he or she lacks wit, par example. No offence, but there seems to be a lot of such persons in the world these days; this is because focus is on how to acquire money for one’s needs with little attention on how to feed the mind or even grow the money well enough to cater for generations to come.

I was in the company of some friends last week and one of them said that a lady he was interested in told him this:

“D, you have attended good schools, you are smart but all that is meaningless because you do not have money. Wasn’t the essence of the school to make money? I will rather be with an uneducated millionaire than a poor man. I think I even prefer an uneducated rich person to an educated one because I will control affairs. He may not be so smart to manage it so I would do that for him”.

There, my friend, a lawyer was bounced. Just like that! But thank God he was told the truth from the start without mincing words.

Back to the issue of metaphorical poverty, I was at a requiem mass last month when I learned that the deceased was the first among his six siblings to receive formal education. Having enjoyed the fruits of education – although not becoming a millionaire – he had been comfortable and liberated. He therefore decided to make sure his children, nieces and nephews of his went to school. That, I thought was a rich person.

I also know of a man who has set up an educational fund to take care of the educational needs of his family who are interested in furthering their education but do not have the means. Although rich and famous, this man acknowledges that if he does not hold the hands of others up the ladder he has climbed, it will be lonely at the top. I have an uncle who is so interested in the wellbeing of young people so much so that when you meet him, he will inquire about school, work, trade or whatever enterprise you are engaged in. If your progress pleased him, he will pat and encourage you. If it did not, he will give you a book from his library, send you to anyone he knows who has towed the line you are towing before, or offer hours of advice. To him, the mind did not have to poor.

Fortunately, nurturing the mind to riches does not always require physical amounts. Sometimes, all it takes is to watch a mentor at work over a period, it takes reading, it takes listening to constructive statements, it takes attending workshops or fairs, watching documentaries and others. One must make a conscious effort to reject mental slavery, shallowness and all other synonyms that define an uneducated fellow. 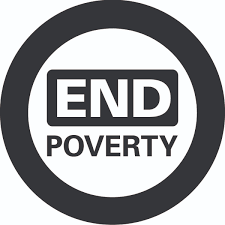 Today is International Day for the eradication of Poverty and rather than focus on the literal meaning of the word, I decided to reiterate one important way of eradicating it –EDUCATION. Get education and 6/10, you will not be one who lacks the means to cater for his or her basic needs. Your data will not be an addition to the list of extremely poor persons. Your environment, your life style, your speech, your attitude, your imagination, your health will not be poor. And when you acquire riches both of mind and of body, do not forget to assist others to get there and beyond.

Happy International Day for the Eradication of Poverty.

1 responses on "ERADICATING POVERTY OF THE MIND"