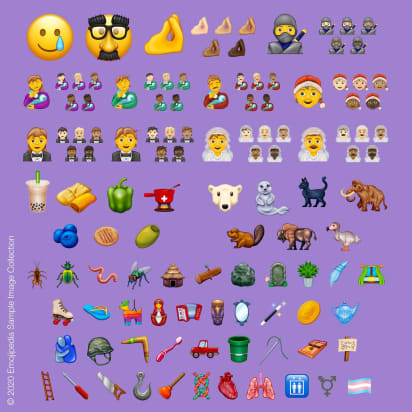 One hundred and seventeen new emojis have been designed, and are set to be released to android and IOS users. Emojis are visual representations of an emotion, object or symbol used by smartphone users to communicate among themselves.

This is an update and addition to the many other emojis that are already in existence.   The new additions include the black cat, bubble tea, a smiling face with a tear, bottle-feeding parents, a disguised face, pinched fingers, anatomical heart, people hugging, a woolly mammoth, a fly, a potted plant, flatbread.

All human-like emojis will have a skin tone option similar to previous ones. This option gives users the option to select  emojis that suits their skin tone.

The new symbols will expand on the existing ones, helping users to express themselves better and clearer.

The new set, which includes a total of 117 new pictograms, will be released later this year. The final say lies with manufacturers of smartphones to incorporate them via a software update.