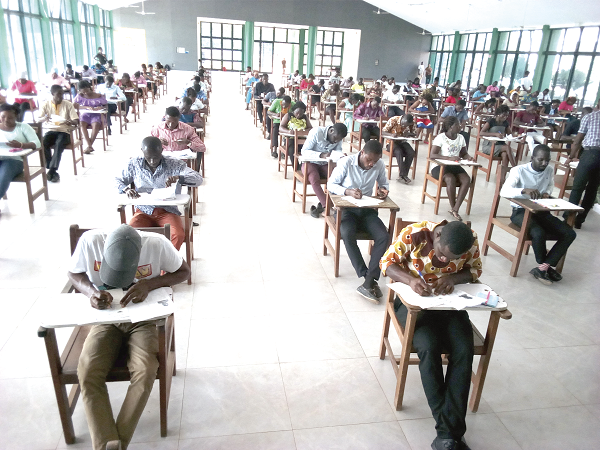 There have been reported cases of examination malpractices at some examination centres during the first teacher licensure examination which lasted three days across the country.

Information gathered indicates that some of the candidates had prior knowledge of some of the question papers, while others were reported to have entered the examination hall with foreign materials.

Some of the questions are reported to have been leaked and that resulted in the long delays in the start of the exam at the various centres across the country.

The National Coordinator of the examination at the National Teaching Council (NTC), Mr Francis Kwasi Addai, confirmed that some irregularities were associated with the exam. He said five of the candidates who were involved in the examination malpractice had been arrested.

The candidates, who are yet to be identified, according to Mr Addai, were caught at the exam centres last Wednesday, sharing the questions on the Numeracy paper which they were yet to write among themselves.

The paper leaked and the candidates were trying to solve the five questions it contained when officials of the NTC arrived at those centres.

Mr Addai said the questions were changed immediately the authorities had wind of what had happened.

He disclosed that the Numeracy paper leaked twice and officials had to re-set the questions before the candidates could sit that paper.

The Executive Secretary of the NTC, Dr Evelyn Owusu Oduro, who also briefed the Daily Graphic at the end of the exam, reiterated that there were “pockets of malpractices” during the examination.

She said all those involved in the malpractices had been handed over to the police for further interrogation.

Dr Oduro advised potential and subsequent candidates to desist from such acts because just like all other external examinations, any candidate caught indulging in any malpractice would be handed over to the police.

The examination was written by 28,576 newly trained teachers across the country with no absentees.

The candidates were those who completed colleges of education this year and those who read Education in the various universities and colleges and are desirous of being employed by the Ghana Education Service (GES) to teach in public schools.

They were examined in essential professional skills, literacy and numeracy. Dr Oduro said the results would be released by the first week of October.