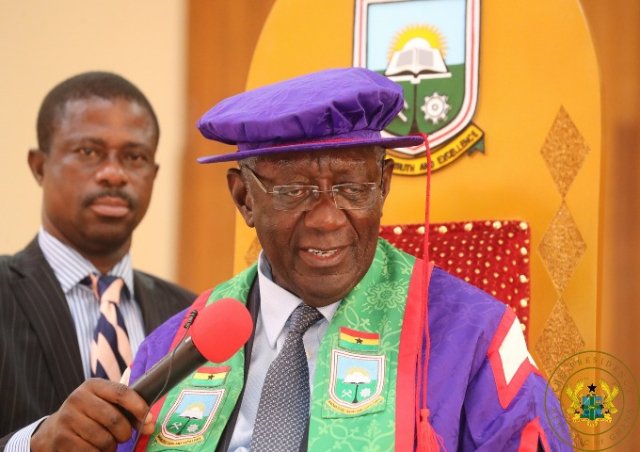 Ghana’s former President, John Agyekum Kufuor has been appointed as the First Chancellor of the University of Mines and Technology in Tarkwa. He was inaugurated at a ceremony held at the university’s auditorium.

President Akufo -Addo has described the former president’s appointment as well-deserved. The president commended the university for working to produce graduates ready for the industry in the field of engineering. He added that the University of Mines and Technology puts Ghana, a country rich in minerals and which has a 1,000-year history of mineral exploitation in a strategic position to be a global leader in mining and its allied industries.

President Akufo-Addo stressed by saying, “it is a well-deserved honour, given in recognition of the immense work you did, during your time as President of the Republic, not only for UMaT, but also for Mother Ghana. Ayekoo. I commend the authorities of the University for this admirable gesture.”

The President also commended the University’s Council for their decision to rename the institution after the first President of the United Gold Coast Convention George Paa Grant, to George Grant University of Mines and Technology, Tarkwa.

0 responses on "FORMER PRESIDENT KUFUOR MADE CHANCELLOR OF UMaT"