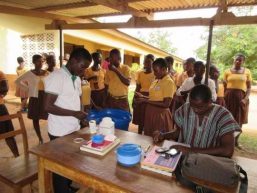 Thousands of children from the kindergarten level through to the Junior High in over 20,000 schools are expected to re­ceive a tablet of Albenda­zole each.

This was made known at a press briefing in Accra last week by officials from the Neglected Tropical Diseases Programme (NTDP) under GHS.

Trained personnel, who will administer the medi­cines, would also educate the pupils about the dangers of worm infestations.

The Deputy Programmes Manager for NTDs at the Ghana Health Service, Dr Kofi Marfo, said the de-worming exercise would have enormous benefits for the health of children since it would improve their ap­petite and well-being.

He also mentioned that the disease affects about seven million people yearly in Ghana, saying it was unacceptable and called for a change in attitude, espe­cially with open defecation.

The exercise, which is expected to last for one week with the possibility of an extension, is aimed at reducing the prevalence of NTDs in Ghana by 2020.

Dr Marfo advised par­ents to make sure their kids are fed before going to school so as to prevent any side effects of the medicine, saying taking the drugs on empty stomachs are the major cause of the effects that come up after the drug administration.

The NTDs are a group of infectious and parasitic dis­eases and about 17 of them are found in the most im­poverished communities of the world.

In Ghana, there are 12 of such diseases and this in­cludes, amongst others, soil transmitted worms and schistosomiasis diseases (bilharzia) which are most common in humans and the most vulnerable is school children aged from 5-14 years.

Schistosomiasis may also lead to passing of bloody urine, feaces, vomit­ing and fatigue. It may lead to cancer of the bladder.