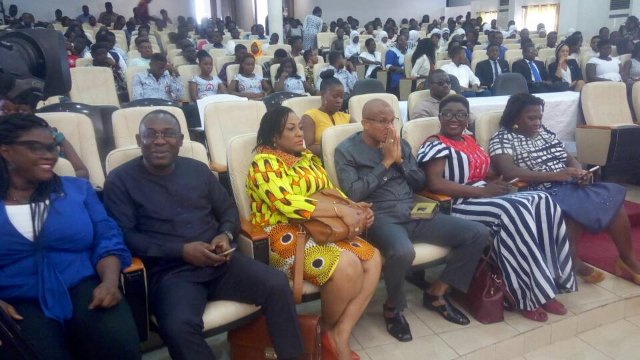 The Ghana Institute of Management and Public Administration (GIMPA) emerged victorious in the first edition of the National Commission for Civic Education (NCCE)’s 2018 Civic Challenge.

GIMPA won with 835 points while the University of Education, Winneba scored 781 points. The competition started with 16 schools from all ten regions of Ghana. The Kwame Nkrumah University of Science and Technology (KNUST) placed third.

GIMPA, the winner of the competition was awarded a cash prize of GHS2,000, books and some consumables.

The debate was on the motion “60 years after independence, does Ghana need foreign aid for its development?” While GIMPA argued against foreign aid, UEW argued in favor of foreign aid. Citing Proverbs 22:7 the GIMPA debaters supported the government’s agenda to take the country off donor dependency, thereby suggesting radical solutions.

After a fierce battle, only 54 points separated the two debating teams with GIMPA carrying the day with 853 points.

Minister for Information, Mustapha Hamid, who was at the event charged students to take extra-curricular activities seriously because they constitute about 70 percent of the things that will help them in life.

While advising them to prioritize classroom lessons, he encouraged them to attend debate competitions and seminars on campus as well.