Girls Encouraged to Explore their Potentials in Tech 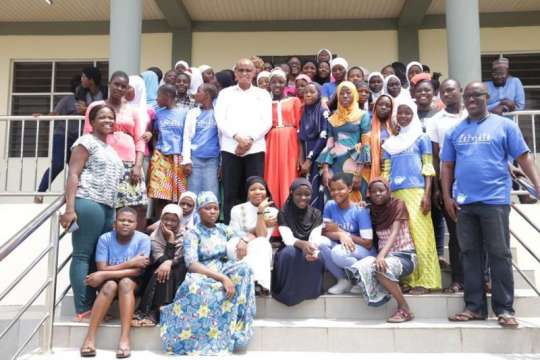 Young girls have been encouraged to explore their God-given potentials and pursue their vision in life, in becoming software engineers and computer genius to make a difference in society. This encouragement was by Dr. Mustapha Abdul-Hamid, the Minister of Inner City and Zongo Development.

Addressing sixty girls selected from underprivileged communities in the Greater Accra Region at a bootcamp in Gomoa-Fetteh in the Central Region, Dr Abdul-Hamid encouraged them to remain focused, godly and morally upright.

That, he said, would enable them to develop inner strengths and principles to resist societal temptations that might try to disrupt them from achieving their aspirations in life.

It was launched. on October 4, 2018, and being implemented by Dream Oval Foundation, an NGO with focus on Science, Technology, Engineering and Mathematics (STEM) education in collaboration with the Ministry of Inner City and Zongo Development.

Mr Francis Asare Ahene-Affoh, the Director of the Foundation, said about 50,000 girls nationwide were expected to benefit from the initiative in the next five years.

The camp meeting is intended to hone the skills of the 60 girls between 13 and 18 years, who were selected from Nima and Maamobi in the Greater Accra Region in software development, entrepreneurship and project design.

The beneficiaries are expected to influence their peers with tech re-orientation and positively impact their immediate environment.

The Minister of Inner City and Zongo Development observed that women were adequate reflection of God’s nature; therefore they should not allow some religious and scriptural misinterpretations that tended to portray women negatively to discourage them from pursuing their careers.

“I have five daughters so am pro-women and hate people who abuse women.

“I want to assure you that I will defend the interest of women at all times and make sure you achieve your vision of becoming computer genius and software engineers,” Dr Abdul-Hamid added.

He, therefore, commended Dream Oval Foundation, the initiators of the project, for the foresight and providing opportunities to the young girls from underprivileged communities and assured that, he would support them to succeed.

The Minister encouraged the girls to remain focused and should not allow societal and religious interpretations, which sometimes portrayed women as seducers and deceivers, but should rather pursue their God-given talents.

He said females were capable to achieve greater heights in life and should not allow anyone’s opinion or misconceptions to disrupt them.

He cited Khadijah, the wife of Prophet Mohammed, who was a backbone to her husband in entrenching the Islamic faith.

The girls showcased practical demonstration of what they had learnt in the past eight weeks and poetry recitals to the admiration of the Minister.

0 responses on "Girls Encouraged to Explore their Potentials in Tech"