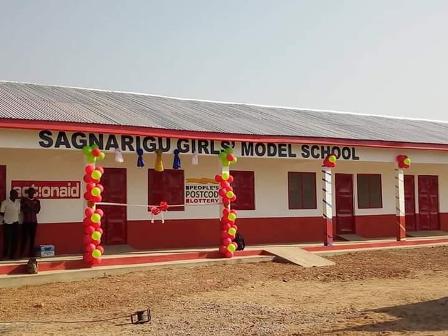 Sagnarigu Girls’ Model School has been inaugurated in the Sagnarigu Municipality of the Northern Region to help teenage mothers and other girls to further their education.

The facility is a three-classroom block with an office, a store, staff common room and a library, stocked with books, toilet facilities and a changing room for girls, as well as each classroom stocked with 20 dual desks.

The facility is for the Junior High School girls only, and apart from the Ghana Education Service’s curriculum, the pupils will also learn other leadership and life changing topics to prepare them for future leadership roles in society.

It was funded by People’s Postcode Lottery of United Kingdom and implemented by ActionAid Ghana.

Mrs Mariam Iddrisu, Municipal Chief Executive of Sagnarigu, said at the inauguration that the facility at Sagnarigu-kukuo, shows government’s commitment to improving access to education, as depicted by the implementation of the free Senior High School programme.

Mrs Iddrisu expressed gratitude to ActionAid Ghana for its efforts at promoting education for girls in the municipality.

Madam Samata Mahama, Sagnarigu Municipal Director of Education said the facility would amongst others, help to ensure gender parity in education in the area to produce illustrious women to take up leadership positions in the country.

adam Esther Boateng, Northern Regional Programmes Manager of ActionAid Ghana advised that the facility be maintained regularly so that more girls would benefit from it.