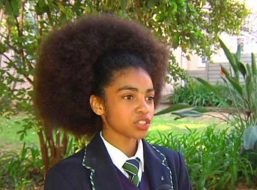 Roberta had just finished having her bath and was performing her early morning ritual. After bathing, she drops her towel, revealing her in full, and then she takes a good look at her chest and lower bits. Since she turned thirteen in February, she has become very conscious of her physique, what she wears, how she speaks and takes note of every change her body experiences. She is an adolescent and wants to know if she is growing into a woman with a figure as nice as that of her favourite celebrity. Her mother shouted at her for being late for school and being overly attentive to her appearance to the detriment of her books. She wanted to wear thongs, tangas and g-strings and will get furious when her mother got her classic, high –cut or control briefs; these were old and un-cool. Luckily, she had no pimples but the young adolescent needed to prevent because it is a sign of adolescence (the only one she didn’t like about the process). So Roberta never ceased to apply honey, lime, egg yolk mixed with aloe vera on her face every other day. Aside the changes taking place on her body, she paid attention to Michael’s body and liked the changes she saw in him and her heart tingled every time she saw him. He had a broad chest, some facial hair and hair on his arms and legs. At times she imagined if he had hair on his chest too.

Michael and his friends also noticed the change in some of their female friends and it caught their attention. They knew which of the girls wore braziers and which ones did not . They could tell when a girl became a member of   the I-wear-a-bra-too-clan. It was easy to tell, it showed through their uniforms even when they wore vests over them; which they seldom did. The girls were pleased to announce their membership status so why try to hide it? While they waited to be picked after school, the boys now preferred to sit and chat about their crushes, whose panty they had seen, who wore a bra today, who was unwell because she had cramps, which guy wore a panty rather than boxers, did not have any facial or pubic hair. In doubt about someone’s adolescent status, they run to the washroom with the person to confirm. They no longer played football or basketball in their uniforms. They had to wear the appropriate attires. The girls had their meetings too.

Suddenly Roberta and Michael could not speak in public. They had to arrange their meetings. Michael’s whatsapp to Roberta read “Let’s meet on the staircase between the form 1 and form 2 block. I can’t wait”. Roberta will reply, “Sure. I can’t wait too and add a heart emoji”. They were in love. During one of such meetings, they kissed. It lasted long and Michael squeezed her breasts and put his hands under her pinafore. After the event, she did not feel right. Had she not ran from him, would he have raped her? She wanted to talk to someone.

Michael was angry. What was Roberta’s problem? He thought they loved each other and had to make the relationship real by having sex as his older cousin, Baffour had told him. He thought she was a cool chap and knew this. She was still a baby and not an adolescent like the guys believed. He will be mocked. That night, they did not have a whatsapp chat. All he wanted to do was talk to Baffour .He dialed his number but his phone was switched off.

I suppose this scenario sounds like one you have heard a lot of times since you became an adolescent. Boys packed at one side and girls on the other side having conversations such as the one Michael and Roberta’s friends were discussing. This is the experimental stage for both parties; the stage most parents and teachers refuse to talk about. How you proceed at this stage is very important. Rather than being fed with information, why not be the one feeding the group with correct information? Read around the topic on sites or simply confirm everything you hear from older siblings such as Baffour by googling. It is that simple! Don’t be mislead into drinking or smoking, they don’t make learning easier or prove you are a man. That is false .Girls, having a boyfriend older than you, having sex, drinking or dressing provocatively does not make you cool, beautiful or the most sought after girl. It simply means you have no morals; you are cheap and easy to get.

Adolescence lasts for six years. Make the most out of it so you don’t have regrets. Enjoy it wisely.