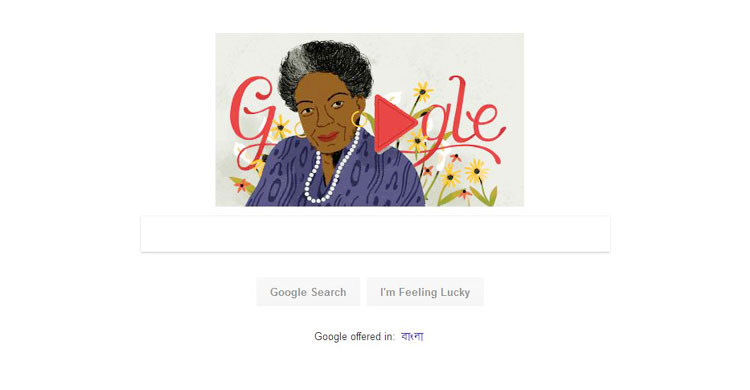 Google is honouring Maya Angelou with a beautiful doodle of the civil rights activist, poet and author. When you click on the doodle on Google’s homepage, you willl find a beautiful illustration of Dr Maya Angelou’s poem, ‘Still I Rise’ read by some personalities.

You will hear the voices of celebrities including Oprah Winfrey, Laverne Cox and Alicia Keys. Some sections of the poem are also read by America Ferrera, Martina McBride, Maya Angelou herself and her son Guy Johnson.

Maya Angelou was a strong activist whose work focused on race and identity.

She is best remembered for her autobiographical novel I Know Why The Caged Bird Sings which was published in 1969.

Dr Maya Angelou was born in Marguerite Annie Johnson in St Louis, Missouri. After being sexually assaulted and raped by her mother’s boyfriend, she became mute for seven years.

She however was able to overcome the trauma and rediscover her voice when she committed her time to reading various pieces of literature.

In her early years, she engaged in various occupations such as a nightclub dancer, fry cook, sex worker, performer and a cast member of an opera. She also worked as a journalist in Egypt and Ghana at some points in her life. She is also remembered for her work as coordinator for the Southern Christian Leadership Conference.

Dr Maya Angelou died in May 2014. Today would have been her 90th birthday

0 responses on "Google honors Maya Angelou with a beautiful doodle"