He is Not a Man of Disorder; Say it Loud 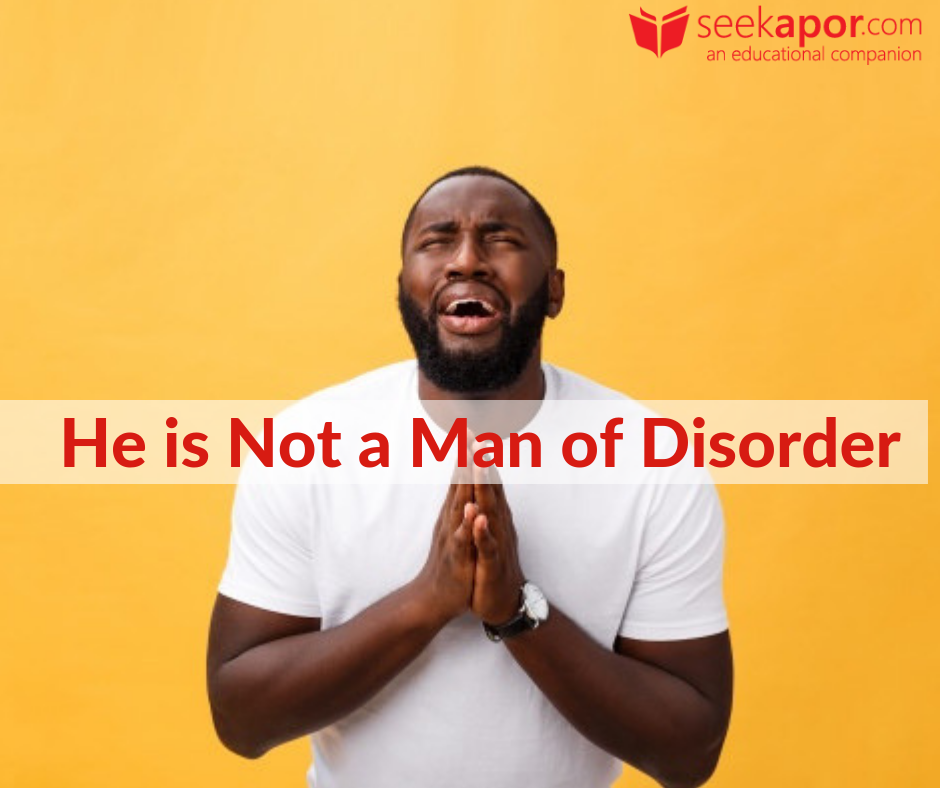 Growing up, it was common to hear the name of God in everything. These days, it seems God is even attributed to the evil things that people do. This isn’t blasphemy. Journey with me as I recount some events before you pass judgement.

Saturday; I met up with some friends. On my way home, I joined a public bus. There was a lady who bought a bottle of drink and some biscuits from one of the street hawkers when the traffic light turned red. They weren’t done transacting their business when the lights turned green.
The hawker shouted in Twi , “Driver, hold on for me to finish delivering the passenger’s goods”. The driver yielded. The hawker turned to her fellow and showered blessings on the driver saying:
There are some drivers who are very good. They are the ones God should bless. Look at how patiently he waited for me to sell. I would have lost that sale.
Both hawker and driver paid no heed to the cars behind our car honking for him to move. He ignored the fact that he wasn’t parked properly and had caused some distraction. Those drivers who honked for passing were the ones being described as evil. Does God bless people who cause public distraction?

This is another scenario recounted by my friend, Martin. When he assumed the role of supervisor, his job description stated clearly that he was to query staff who reported late for three consecutive times without permission. Amongst other things, he was to ensure that everyone did the right thing at the right time and was generally productive. Anytime he performed his role, he was described as mean, heartless, wicked and not God-fearing because he wanted the downfall of his colleagues.
I asked, did they not intend to cause their own downfall?

There is the sign, “No Hawking”, “No parking”, “No Stopping” slashed all over Accra but let’s not talk about how people hawk and park right in front of these signs. Rather,  let’s talk about what happened when Ama, a friend of Ray prevented him from buying from a street hawker. Ama suggested to the hearing of the hawker that it was safer to buy from the market (2mins away) than by the roadside.
Words cannot dramatize the insults the hawker and her colleagues rained on Ama that afternoon. Amongst other things, she was called an agent of the devil who was sent to sack her customers.

Tipping is a common phenomenon in Ghana as well as other parts of the world but it is not obligatory, as we know. It is only a sign of appreciation for an exceptional service rendered. That is what I thought until I started frequenting a nearby restaurant for lunch. I noticed that I was given poor service anytime I went there. Even though I complained, the culprit will only apologize and repeat the act the next time I was there. That particular day, I met a friend there and sat next to him. The same waiter who had worn a frown the whole time and behaved rudely was beaming with smiles, giving suggestions and in top form.

I asked my friend if he was a shareholder of the place or he got the waiter the job. He was surprised when I told him about the poor service I got from the waiters and waitresses. On his way back from using the washroom, he stopped the said waiter and asked if he recognized me. As my friend told me, I tell you;
Sir, don’t mind that woman. You are the correct boss. You are the kind of people we pray for to come by every day. That woman does not tip us, she picks up all her change and eats all her food. Well, she doesn’t look as porch as you.
My friend said he was irritated and told the waiter he will report to the supervisor.

The waiter stood wondering what he had done wrong and even went on to say that it was only normal to be very nice to those who looked like they had some money to spare. After all, it is because of money they work. More irritated, my friend walks towards the office of the restaurant. The waiter shouts looking at me, “You see what you have done? Allah will punish you. You don’t tip to and now this Boss won’t tip me again”. This is what as children, we would have termed, the-impudence-of –a dying- cockroach.

Notice the trend? In all of these instances, the culprits were rather quick to declare judgment on behalf of God. Do you find yourself behaving like these people? Do we expect to develop if we break rules and get offended when punishment is metered?

No matter what religion you follow, I am sure its leader is not one of disorder and does not punish those who are doing the right thing. Kindly note.

Get more interesting updates, tips and opinions by filling the form below.

0 responses on "He is Not a Man of Disorder; Say it Loud"