How to use ‘Emergency Restart’ to reboot a frozen Windows PC 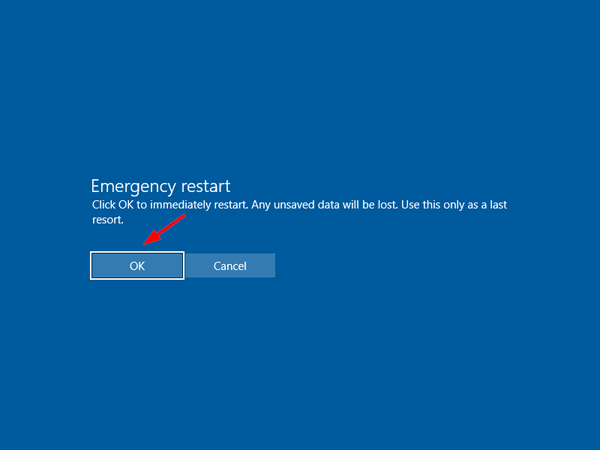 Microsoft Windows is famous for occasionally “freezing up”, and when that happens it can be difficult to get the system to respond to your mouse clicks and key presses.

Out of frustration, many people handle these situations by unplugging the power cord on a desktop PC or removing a laptop’s battery in order to force the PC to shut down immediately, but there’s actually a much better way to shut down a frozen PC.

Windows 8.1 and Windows 10 both have an “Emergency Restart” procedure that basically uses brute force to close any open programs and then shut down and restart the PC.

Of course initiating an Emergency Restart will result in the loss of any data that hasn’t already been saved to the hard drive, but it’s still vastly preferable to simply removing the computer’s power source.

The next time you’re confronted with a frozen PC running either Windows 8.1 or Windows 10, give the Emergency Restart procedure a try. Here’s how:

2 – Press and hold the Ctrl key, then click the Power icon located in the lower right-hand corner of the screen. Windows will now warn you that you’ll lose any unsaved data if you proceed with the Emergency Restart.

3 – Click the OK button to force the PC to immediately shut down and then boot back up into Windows.

That’s all there is to it. Hopefully you won’t have to use the Emergency Restart feature very often, but when you do it’s sure to come in handy.