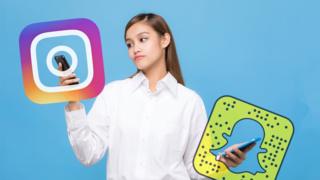 Instagram has overtaken Snapchat as the most used social media app among US teens, according to a study.

A total of 8,600 teenagers were surveyed. The report indicates that 85% of participants used Instagram at least once a month compared with an equivalent figure of 84% for Snapchat.

But rankings were reversed when the teens were asked which they preferred.

Snapchat was picked as the “favourite social platform” by 46% of those questioned, while Instagram was chosen by 32%.

That figure may offer some reassurance to Evan Spiegel and other chiefs at parent firm Snap that their efforts to address a backlash against an unpopular redesign are working.

But it is the engagement figure that has dominated headlines, and threatens to feed a narrative that Snapchat is on the decline.

In August, Snap reported that for the first time the number of people using its service on a daily basis had dropped.

And on 11 October, its shares hit an all-time-low after one analyst claimed the firm was “running out of money”.

By contrast, Instagram is flush with cash thanks to its popularity with marketers.

In particular, the Facebook-owned Instagram’s addition of Stories – which was launched in August 2016 – has fuelled its popularity among teenagers.

The self-destructing videos and photos – which remain live for just 24 hours – were only introduced after a similar feature had already been popularised by Snapchat.

0 responses on "'Instagram Used More than Snapchat' by Teens"