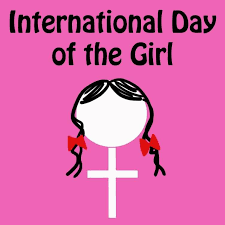 Growing up a girl. Well there’s  the whole debate about the male species  being superior, the female species  being superior and both species being equal. Right from birth the stereotypes  and perceived normality begins. Growing up a girl your favorite  color is expected  to be pink,  you’re  expected to love playing  with dolls and dressing up. In my family,  that was hardly the case. We had the option to be our own type of normal. I was never the doll type, instead I had a host of teddy bears. One of my sisters  was terrified  of dolls, therefore we both defied the perceived normality  of a girl  child. This same  sister of mine has had purple as her favourite color since day one and I ,have never had a favourite color. Once again we defied the perceived normality of a girl child. You see society  has a perceived normality for a girl  child but the thing is there is a wide range of normal  and not everyone can fit Society’s description of normal. The immediate  sibling before me is a boy and so I spent most of my time around him growing up. So instead of watching Barbie I would be watching Batman, Superman, Spiderman basically  all the male marvel heroes. Instead of playing ampe  I would be found playing football. Instead of reading Fairytales I would be found reading action comics. As a result of spending a lot of my time with my older brother I got accustomed  to male company . Since nursery most of my friends  have been males. I can say about 70 percent of my friends  are males today. I don’t  have a problem  with that,  at all. But some people  find it peculiar. At the adolescent stage when your type of normal does not fit the Society’s  description  it is more visible. At the adolescent  stage  ,girls begin to become aware of their surroundings and people’s  opinions  of their being. Most of the opinions  that matter are from the opposite  sex. Girls start to question  their appearance  and attitude when it doesn’t  match the majority  of girls or when people  with different  attitudes  or structures receive more attention. The great thing about a wide range of normal is that everyone is special. Each girl’s uniqueness appeals to a different crowd. Girls sometimes look down on themselves  when they do not fit Society’s description  of normal .The curvy girls envy the skinny girls and vice versa. The tall girls envy the short girls and vice versa. The fair girls envy the dark girls and vice versa. But what each category fails to realize  is that there  isn’t  one type of normal and that’s  what makes girls beautiful. Because  we are all different and special in our own  way. Each and every girl must embrace her beauty inside-out because she has been blessed to be a part of the wide range of normal. Then the comes the stage where some careers are meant for the opposite  sex and girls are told to deter from such careers. Well here is the thing, I believe  you can be whoever and whatever  you want to be as long as you work for it. So the stereotypes  should never come to play in your choices as long as you are determined.
Diane Mariechild once said,  a woman is a full circle. Within her is the power to create, nurture and transform.