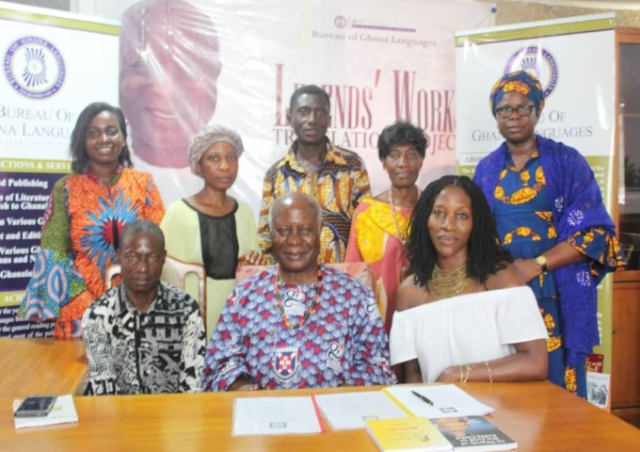 The Bureau of Languages has commissioned the translation of literary works of notable literary legends in Ghana into eleven (11) indigenous Ghanaian Languages. This forms part of the Bureau’s agenda to celebrate some literary giants who have contributed immensely to the Ghanaian literary sector.

The project which is themed “Legends’ Works Translation Project” is tipped to translate works of poems, prose and plays from literary giants such as Prof. Atukwei Okai, Prof. Kofi Awoonor, Prof. Kofi Anyidoho, Dr Gheysika Agambila, Dr Mawuli Adjei, Theodora Afua Sutherland, Prof. Lade Wosornu among others. The aim of the project is to whip up support for local Ghanian Languages and to also broaden readership of Ghanaian literary works among avid readers.

The first of the legend whose work has been selected for this prestigious project is Prof. Lade Wosornu. He is an astute essayist, poet, columnist and a retired surgeon. Seventeen (17) of his poems including the very popular ‘Master Brewer’; ‘Desert Rivers’; ‘A Re-discovery’; Raider of The Treasure Trove, have been selected for translation into Ewe, Ga, Twi (Asante & Akuapem), Fante, Dagaare, Dagbani, Kasem, Gonja, Dangme,Nzema among others.

Prof. Lade Wosornu is one few men of science who have bridged between the gap arts and the sciences. He retired as a successful surgeon and has many relevant literary works under his belt. He is a prominent figure in the Ghanaian literary & academic landscape. He has three collections of poetry works—Ete & Other Poems, Celestial Bride & Other Poems and Journey Without Ends & Other Poems.

These literary works will be studied in senior high schools for the next five years as part of selected African poems. The aim of this project is to encourage the patronage of Ghanaian literary works among Ghanaians and beyond the shores of Ghana.