Many children in Tema Manheam attend school in tattered clothes 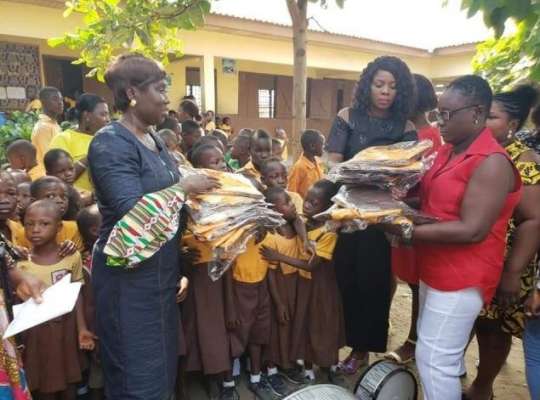 While some are innovative enough to patch the holes in their uniforms especially at the hip and buttocks, others wear theirs without buttons and zips in their quest to enjoy their right to basic education as Ghanaian children.

The misery of the children came to light when the Tema Restoration Ladies led by their patron, Mrs Emelia Anang-La, wife of the Tema Metropolitan Chief Executive, presented 200 sets of uniforms to pupils in some public basic schools in the Metropolis.

Miss Elizabeth Tetteh, Head teacher of the Manhean TMA Primary ‘A’ told the Ghana News Agency that out of the 556 pupils’ population of the school, over 200 of them including the school’s girl’s prefect wore tattered or no uniform.

Most of the children who came to school unkempt, stayed with guardians and parents who refused to honour calls and invitations from the school to discuss the welfare of their wards.

The children were always sad as most of them were drown in self-pity and could not mingle with their peers at school, Miss Tetteh told the visitors.

Miss Frances Aboagye, Head teacher Manhean Community Primary, another deprived school, said apart from the uniform issues, most of the children did not have books and other needed stationary hence teachers had to provide for them.

Majority of the children had parents employed in the fishing sector who cared more about their businesses at the Tema Canoe Beach than seeing to the welfare of their children.

According to her, she had to keep beverage and biscuits in her office to feed children who reported to school hungry to help sustain them until the School Feeding Programme meal was served.

Visibly shaken Mrs Anang La promised that the Ladies would distribute 1,000 of the uniforms to the deprived pupils by the end of the year.

She added that the presentation formed part of the group’s aim to support the MCE’s ‘Restoration Agenda’ especially in the provision of quality education and other social issues including clean-up exercises.

Miss Akos Dzakpasu, a class two pupil of Mahean TMA ‘B’ Primary School, who also wore a threadbare school uniform, expressed her joy at receiving a new uniform saying, she would now attend school with confidence.