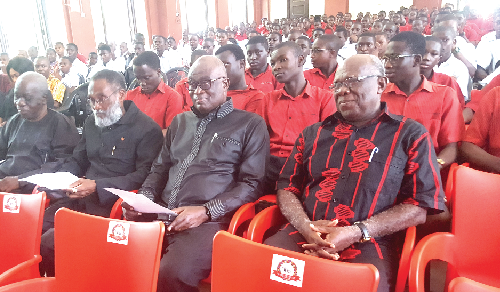 A memorial and thanksgiving service has been held in honour of the late former United Nations (UN) Secretary- General, Kofi Annan, at the assembly hall of his alma mater, the Mfantsipim School, in Cape Coast.

The solemn service which was organised by the management of Mfantsipim School last Wednesday,  had in attendance staff, students, old students and former headmasters of the school, and was held in appreciation of the contributions made to the school by Kofi Annan.

Reading a tribute on behalf of the school, the Headmaster, Mr Manfred Barton-Oduro, eulogised the late Kofi Annan as a hardworking and excellent team player who sought the collective interest of all.

He said the former UN Secretary-General would be remembered as a man of principle and gentle disposition and one whose humility preceded him in all his endeavours.

“Kofi Annan was a perfect gift to Mfantsipim, as well as Ghana and the world as a whole. He was a man of peace yet he was always ready to fight for justice,” he said.

Mr Barton-Oduro urged students and staff to emulate the unique traits of Kofi Annan, while striving to do their best in every aspect of their lives.

He said the memorial service should serve as a motivation to both staff and students to live their lives in a way they would always be remembered for good.

“Even as we celebrate an illustrious son of this great school, let us use this opportunity to motivate ourselves to become great people in this great nation and beyond,” he added.

In a sermon at the ceremony, the Superintendent of the Ola West Circuit of the Methodist Church, Very Rev. Ebenezer Enninful Boateng,  urged leaders to be focused and committed wherever they found themselves.

He said just like the former UN Secretary-General, leaders must have the love of their people at heart and must always be committed to doing what was right.

“I would entreat all to follow in the steps of Kofi Annan who was a perfect leader, gentleman, statesman and peace-maker that always had the love of all at heart,” he said.

A former Headmaster of Mfantsipim School, Mr Koame Mieza Edjah, described the late Kofi Annan as an epitome of humility and self-discipline.

“I had the opportunity to interact with him during my tenure as the headmaster when he visited the school in 2010 and I must say he was a very humble and focused person,” he said.

The Assistant Head Boy, Technical, Nana Sam Yeboah, said the life of Mr Kofi Annan had taught him to be unique while being focused and standing for what he believed in.

“Mr Kofi Annan was an example of power and a power of example and I believe his legacy will inspire a lot of young people just as it has inspired me,” he said.