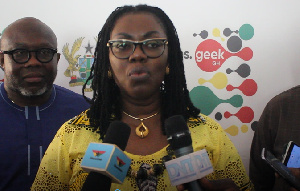 Ms Geek, a competition which seeks to empower girls to embrace ICT was launched by the Ministry of information last week.  The aim of the competition is to encourage and change the attitude of young girls to adopt and acquire ICT skills.  The goal is to empower young to consider ICT as a career choice in future.

The competition themed ‘Ms. Geek Ghana Competition’ is opened to young women between the ages of thirteen (13) and twenty (25).  All young women who fall within this age bracket are encouraged to apply. The application should centre on a technology-based solution aimed at solving basic human challenges we face as a nation.

The Minister of communication, Mrs Ursula Owusu-Ekuful who declared the competition opened; reaffirmed her ministry commitment towards highlighting the roles of women in the tech industry. According to her, the Ministry is poised to offer support to young women who want to better themselves.

Speaking to the media in Accra she said, “Students of Mamfe Methodist Girls won the International Robotics Competition and they informed me that they have also developed a solution to the bed-bug infestation in our second cycle institutions. There are probably many more of such hidden talents utilizing technology to solve common everyday challenges,”

She also called on girls between the required age to take up the challenge in other to stand a chance of representing Ghana in this year’s Ms Geek Africa Competition which will take place in Guinea.

Furthermore, she also called on stakeholders to support the competition to encourage more girls to consider a career in science and technology. She added that the competition will empower young by educating them in science, technology, engineering and mathematics (STEM).

By the end of December this year, shortlisted applicants will partake in a master class and afterwards present their solutions before a panel at the Innovation Africa Summit as part of its activities. All Ten (10) finalists will be given the international spotlight for partaking in the competition.