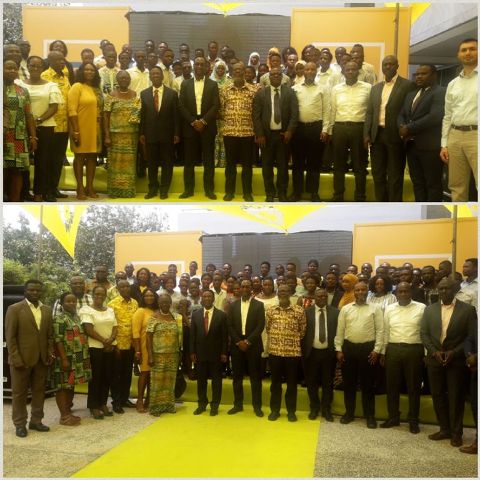 The MTN Ghana Foundation, under its Bright Scholarship Award, has offered full academic scholarships to 100 brilliant but needy students in public tertiary institutions to assist them in achieving their dreams in life.

The scholarship, which covers tuition and accommodation fees as, well as GH¢500.00 per semester stipend for reading materials, was handed to the beneficiaries at a ceremony held in Accra on Wednesday.

Mr Selorm Adadevoh, the Chief Executive Officer of MTN Ghana, said the Telecommunication Network Company was committed to the empowerment of the youth because investment in them was an investment for a better future in Ghana.

Mr Adadevoh shared a story of a friend who dared to dream and followed through to accomplishment and thus advised the beneficiaries to be committed to the educational path they had taken.

He said, the MTN Foundation was expectant of a better outcome of the scholarship awards urging them to demonstrate leadership, integrity and build a strong ‘can do’ spirit as they had become ambassadors of the MTN brand.

Professor Kwesi Yankah, the Deputy Minister of Education in charge of the Tertiary Sector, commended the MTN Ghana Foundation for intervening to support the students to keep their dreams alive by assisting them financially.

He said the Government was committed to making education as accessible as possible to all Ghanaian of school going age, as demonstrated by huge investment in that area.

For about five years now, he said, the Government had invested between 20 per cent and 27 per cent of the National Budget in the education sector.

However, the Government alone could not support education entirely, he explained, therefore, more organisations and companies should emulate MTN Ghana to support the brilliant but needy young ones.

Prof Franklyn Manu, the Chairman of the MTN Foundation, said the Scancom Plc, during its 20th Anniversary in 2016, pledged through the Foundation to award 100 scholarships to students in public tertiary institutions.

The MTN Bright Scholarship would, therefore, be awarding 300 scholarships over three years in fulfilment of that commitment.

He said, in April, this year, the Foundation requested qualified students to submit their applications for consideration, adding that, at the close of the deadline, more than 1,500 entries were received from all the 10 regions, out of which 205 were shortlisted and the final 100 selected through an interview.

Since the establishment of the MTN Foundation, Prof Manu said: “We have invested over USD 13 million into 142 education, health and economic empowerment projects that have led to brightening more than four million lives across the country.”

Ms Ewura-Esi Manful, a Level 300 student of the Kwame Nkrumah University of Science and Technology (KNUST),  a beneficiary, on behalf  her colleagues said, the scholarship had come as a motivation to move them on to achieve their dreams.

She pledged that they would work assiduously to achieve their academic goals and the objectives for instituting the MTN Bright Scholarship award as well as give back to society.