MY DAUGHTER DOESN’T WANT TO COOK BECAUSE HER BROTHER DOESN’T COOK! 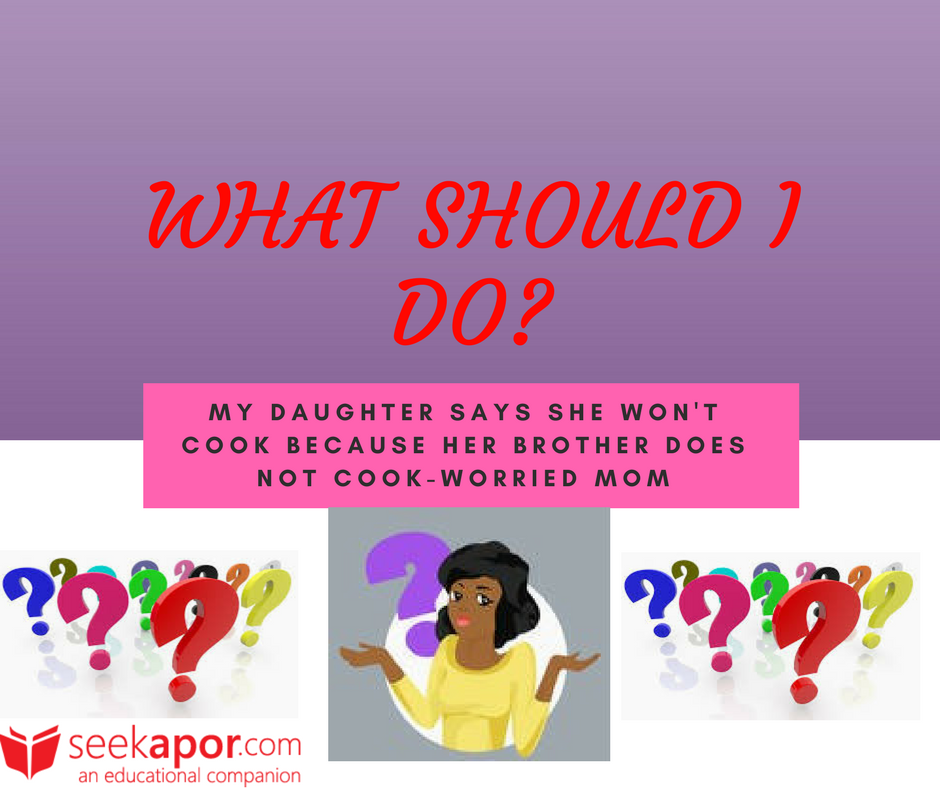 Before I go into my issue, I want to say a big thank you to Seekapor for such a wonderful platform. Judging from the blogs I have read here so far, I believe this is a good place to air my views and seek help.

I have been trying to raise them like I was raised, which I believe is the best. I reserve some tasks for Shika and others for Sika. For example, Shika is to do the dishes, sweep, clean and cook. Sika mops, empties the bin, runs errands with his bicycle and tidies the compound.

I think Shika is following some debate going on social media and does not want to perform the ‘female ‘ roles I have assigned her. She wants to switch with Sika. Or rather, she wants whoever is free or available at a time a chore needs to be done, to do it.

If Sika is back from football first, he should cook. If daddy needs something and she is the one in sight, she should be called to attend to the errand.

I must admit, it makes sense. But how? To me, a girl should cook. A man should perform other tasks.

She says she wants to be allowed to do a sport too. Their father does golf on Saturdays and she likes to follow him(they used to before she turned 11). Now, daddy goes to the golf course with Sika(who is not too interested in the sport) while Shika stays back to help me prepare the soups and stews we need for the week.

You should see the look on Shika’s face! She doesn’t get why she has to wake up early and go with me to the market while Sika sleeps and only wakes up when we return to pack the things out of the car. She doesn’t also understand why she has to stay back home to do the cooking when she would prefer to golf.

Well, Sika prefers to go to the market with me because he is a food lover and can try and lobby me to buy more ingredients which will force me to do some baking or prepare some dishes I don’t intend to do.

Fellow parents, my dilemma….what do I do? I’m tired and running out of explanations to give Shika concerning the role of a male and female. She insists those roles were set by society and can be changed.

I will be glad to hear from parents who have had similar challenges and how they dealt with it.

A worried mother from Airport Hills,

2 responses on "MY DAUGHTER DOESN'T WANT TO COOK BECAUSE HER BROTHER DOESN'T COOK!"