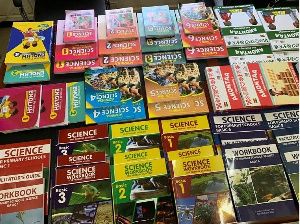 The National Council for Curriculum and Assessment (NaCCA), on behalf of the Ghana Education Service (GES), has outdoored the first batch of recommended textbooks for use in teaching the new curriculum at the KG and Primary levels.

A total of 187 books were announced at a short ceremony on Thursday, with more textbooks expected to be announced next week.

The recommended textbooks cover some of the subjects from KG through to Primary Six including Mathematics, Science, English, Creative Arts, among others.

The Executive Secretary of  NaCCA, Dr  Prince Armah expressed Gratitude to partners and stakeholders, particularly teachers and parents for their patience in waiting for textbook developers and publishers to at least bring some materials for assessment.

He added that some of the subjects have at least three different recommended textbooks from different publishers which could give the pupils varied explanations and ideas on the concepts in the curriculum.

According to him, for every textbook recommended, there is the teachers’ guide and depending on the subject area, a workbook, all of which are aimed at ensuring effective teaching and learning of the new curriculum.

He said “We have about 27 submissions which have just been brought for assessment. The process continues. We hope to assess as and when publishers bring materials,”

Explaining the reasons for the seeming delay in recommending new textbooks for the new curriculum, Dr Armah told a cross-section of journalists that NaCCA and the Publishers had to go through rigorous feedback processes before finally recommending the first batch.

Furthermore, by its mandate, NaCCA prepares a curriculum but cannot go into the publication of textbooks since NaCCA is the regulator in the industry.

He also acknowledged the possibility of unscrupulous businessmen flooding the market with non-recommended textbooks, saying NaCCA will soon announce shortcode that will help parents and the general public verify the authenticity of the textbooks they buy on the market.

0 responses on "NACCA OUTDOORS NEW CURRICULUM AND ASSESSMENT FOR KG AND PRIMARY LEVELS."