Parents Urged to Speak Local Languages With Their Children at Home 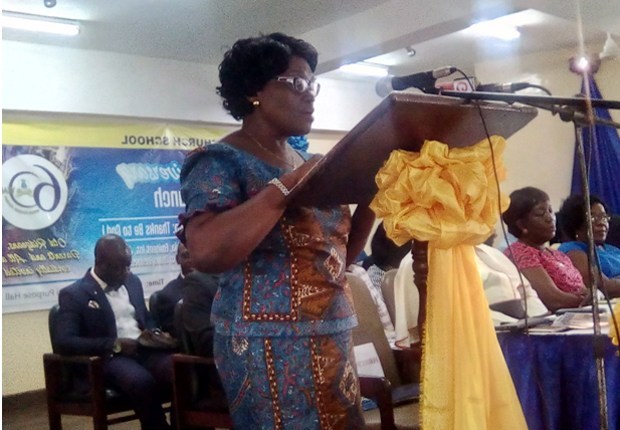 Parents have been urged to speak local languages with their children at home. Headmistress of Ridge Church School, Afua Dake has emphasized the importance of Ghanaian languages and the need for guardians to speak with their wards in local languages.
Language, she mentioned, is part of one’s culture and is the only tool that makes one associate with a group of the same cultural traits.

“I think that your culture makes you who you are, and language is part of culture. So if you belong to a particular group of people and you cannot speak their language, it becomes very difficult for you to claim to be part of them. You become an alien there,” she explained.

Speaking at the 62nd speech and prize-giving day, she bemoaned the attitude of some students towards Ghanaian languages, therefore making it difficult for the school to achieve its aim.
“I urge guardians to speak the local dialects with their wards to arouse the interest in them to study and speak the Ghanaian language,” she said

“The students are very fluent in English, and it stays with them throughout, and this makes it difficult to get them to study the Ghanaian languages as a subject,” she explained.
“It affects us to the extent that we are not able to get the number of 10 ones that we would have wanted our learners to get,” she asserted.

Madam Dake observed that “in schools like ours, we notice that a number of children come to school or they begin school, as it is, speaking English and seldom speaking their own languages.”
She further urged students who pass through the school to allow the school to pass through them as well, especially the religious teachings. She explained that “this has been part of the vision of the school”.
She added that the students should be able to make an impact on others with the moral lessons they’ve acquired from the school, not only verbally but with their lives as well.

Madam Dake encouraged students to continue to read, explaining that “reading gives you new vocabulary and also widens your understanding of issues”.

Touching on the students’ performance in academics, she said “results could have been better, especially when students pay keen attention to the Ghanaian languages”.
She explained that the school had maintained its academic excellence since the time she took over the mantle as headmistress of the school.

The school, in return, honoured Madam Dake as she retired from her 29 years of contributing to the growth and betterment of the school this year.

Her Ladyship Justice Jennifer Abena Daazi, Justice of the High Court, Commissioner Division, who spoke on behalf of Her Ladyship Justice Afia Serwaa Asare Botwe, Justice of the High Court, the Financial Crime Division, indicated that parents must be disciplined in order to raise high-achieving children, who would be disciplined as well.

Her Ladyship explained that “it is discipline that would make a child study all by him or herself in a boarding school or university without being compiled to do so”.
She pointed out that discipline would be the only tool that can compel a child or an adult to perform a responsibility which is expected of him or her.
“It is discipline that would ensure that a fashion designer would make a wedding gown ready a week or two before the date rather than the bride waiting for it at the last minute,” she said.

Madam Daazi further urged guardians not to refrain from actions that can put the child on the right track, adding that, “Hard work and integrity never go out of fashion; therefore parents should never underestimate that.”
She urged parents not to only be glued to the television or their laptop, but read to encourage their wards to adopt the habit of reading.
“Let’s teach our children to read by showing them our own attitude as an example. Parents should not spend all hours in front of the television or the laptop,” she explained.