Patrick Awuah:A Teacher and A Sensei 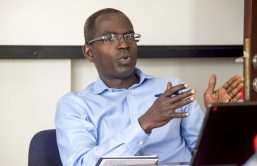 Patrick Awuah’s exploits in education with Ashesi University are well known, the inspiration behind his actions tell an interesting story

Stroll through Ashesi University’s Berekuso campus on Monday and Wednesday evenings and you will find Patrick Awuah Jnr, the   university’s founder and president taking   Karate Club members through lessons in martial arts.

He is man of many parts, perhaps the most surprising is his role as a Sensei (qualified Karate instructor)

His interest in Karate was kindled during his university years at Swarthmore College, attracted by its emphasis on non-violence, discipline and respect .He pursued further training in the art for two years whiles working with Microsoft and now holds a karate black belt.

To Patrick Awuah, karate is more than a hobby. It has also influenced his approach to education with his methods are strikingly similar guiding principles in karate

KNOW THYSELF, AND OTHERS

He relates with his students in an unusual way, preferring to file along with students at the School cafeteria and for lunch as and often joins.  He also insists on his students addressing him simply as “Patrick”.

FREE YOUR MIND
He planned to setup a software company in Ghana in the mid-90’s. But Ghana’s software industry was in its infancy and finding skilled software professionals was difficult.
The setback inspired him to start a University to challenge the status quo. A place where students would be trained into the ethical and innovative leaders of the future.

Rebecca Awuah, Patrick Awuah’s American wife has been his quiet motivator. Without who agreed to help establish the university despite never having been in Ghana. She’s currently head of the maths department

0 responses on "Patrick Awuah:A Teacher and A Sensei"