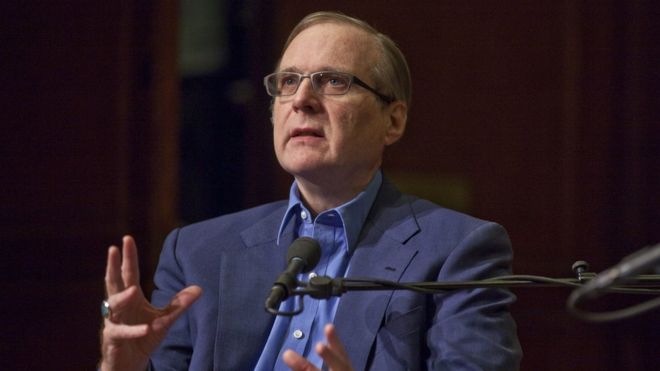 Paul Allen, who co-founded Microsoft, has died aged 65 from complications of non-Hodgkin’s lymphoma.

He had revealed the disease’s return only two weeks ago, after previously being treated for it in 2009.

He had said he and his doctors were “optimistic” about treatment.

His Microsoft co-founder Bill Gates said: “I am heartbroken by the passing of one of my oldest and dearest friends… Personal computing would not have existed without him.”

In a statement confirming his death on Monday afternoon, his sister Jody described the businessman as a “remarkable individual on every level”.

“At this time of loss and grief for us – and so many others – we are profoundly grateful for the care and concern he demonstrated every day.”

The businessman made his fortune alongside school friend Bill Gates, after they co-founded technology giant Microsoft in 1975.

“From our early days together at Lakeside School, through our partnership in the creation of Microsoft, to some of our joint philanthropic projects over the years, Paul was a true partner and dear friend,” said Mr Gates.

“He deserved much more time, but his contributions to the world of technology and philanthropy will live on for generations to come. I will miss him tremendously.”

He left the company in 1983 following his first diagnosis of the blood cancer Hodgkin’s disease, but recovered to become a successful venture capitalist with his media and communications investment firm, Vulcan that he set up in 1986.