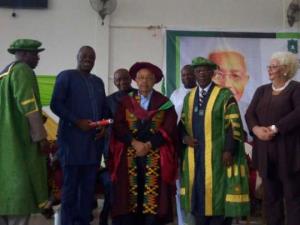 Universities in the country have been urged to review their curricular with the aim of grooming and producing entrepreneurs who will contribute to the country’s economic progress. This was said by President Nana Akufo-Addo in a speech read on his behalf by Mr Mohammed Awal, Minister for Business Development.

The speech was presented at a special congregation of the University for Development Studies (UDS). The president said, “I want us to produce graduates, who can fit into the economy and manage our country’s resources to meet the expectations of our people.”

The special congregation climaxed the three-day Africa Leadership Lectures, an annual event introduced by the UDS in 2013, to facilitate and create an environment for a discourse on leadership as well as provide a platform to inspire positive and innovative leadership.

This year’s lectures, the sixth in the series, delivered by Mr Pedro Verona Rodrigues Pires, Former President of the Republic of Cape Verde, focused on topics including “A Vision of the Struggle for Liberation from Colonialism, A Vision of the Construction of Sovereign States, and African Challenges.”

As part of the special congregation, the UDS conferred an honorary Doctorate Degree on Mr Rodrigues Pires in recognition of his selfless commitment to the service of his country, and his courageous struggle for the emancipation of the people of Cape Verde.

Mr Rodrigues Pires served two terms as President of Cape Verde from 2001 to 2011 and in 2011, he won the Mo Ibrahim Award for Achievement in African Governance.

President Nana Akufo-Addo said “We need graduates with competencies to find solutions to our challenges, who will help solve the problems, who will think deep outside the problems and who, will challenge the status-quo and bring improvement in the living standards of our people.”

He assured of government’s continued support for the universities in the country expressing confidence in the graduates of UDS that they were well-armed to serve the country honestly by coming up with solutions to her challenges.

He commended UDS for instituting the Africa Leadership Lectures and urged it to carry on with the discourse on good governance and leadership on the continent.

Professor Gabriel Teye, Vice-Chancellor of UDS said the issues of funding tertiary education in the country was a major challenge adding funding for public universities had been dwindling over the years affecting vital activities including staff development.

Professor Teye called for useful solutions to funding tertiary education in the country urging private sector and individuals to support the universities to train the needed manpower for the development of the country.

0 responses on "President urges universities to review their curricular"