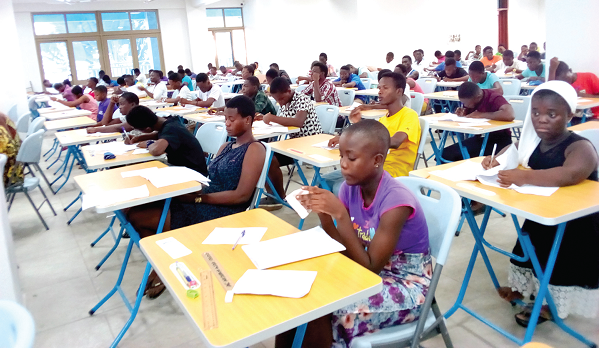 Provisional results of private candidates who took the 2018 edition of the Basic Education Certificate Examination (BECE) have been released by the West African Examinations Council (WAEC).

A release signed and issued by the Deputy Director of Public Affairs of the WAEC, Mrs Agnes Teye-Cudjoe, said the council had hosted the results online on the WAEC’s website.

The statement said the entire results of seven candidates had been withheld pending the conclusion of investigations into alleged examination malpractices, adding that those withheld results would be released as soon as the council concluded its investigation.

A total of 11,886 candidates made up of 6,886 and 5,000 males and females respectively sat the examination which was written at 41 centers throughout the country.

This year’s private BECE recorded the highest number of candidates since its inception in 2015. For instance, last year, 1,379 took part in the examination, while 1,418 and 1,181 candidates sat for the exams in 2016 and 2015 respectively.

Meanwhile, the Ghana Education Service (GES) has announced to the general public that candidates who sat the private BECE in February this year should visit the WAEC’s website for the selection of senior high schools of their choice.

A release signed and issued by the Head of the Public Relations Unit of the GES, Ms Cassandra Twum Ampofo, asked the candidates to visit www.waecinternetsolution.org “to go through the school selection process to be considered for placement for the 2018/2019 academic year.”

“Again, candidates are urged to carefully read the guidelines for the selection of schools before they start the process,” the statement said.

The statement concluded that the deadline for the selection was Monday, July 2, 2018.