Pupils study on bare floor due to lack of furniture 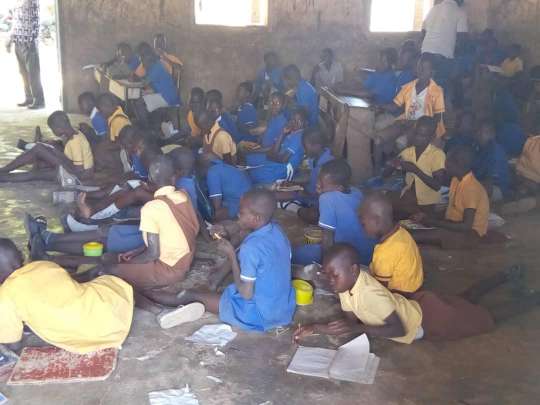 The Yagaba Roman Catholic (R/C) Primary School in the Mamprugu Moaduri District of the Northern Region has inadequate furniture and classroom space, which is affecting academic work in the school.

Most pupils are forced to sit on the bare floor to study as the furniture in various overcrowded classrooms, was woefully inadequate.

Some pupils even lie on their bellies to be able to write.

The few dual desks available were provided by the World Vision Ghana, which had existed the community some years ago, according to checks made by the Ghana News Agency (GNA).

Those that were supplied by the District Assembly, according to our source were woefully inadequate and were distributed to schools across the District.

The school which is located directly opposite the District Education Directorate is supposed to be one of the schools with quality infrastructure in the District, however, conditions in the school including; the classroom were undesirable.

Mr. Edward Azumah Kudow, Assistant Director in charge of Supervision at the District Education Directorate told the Ghana News Agency (GNA) that lack of furniture for schools was a general problem facing schools in the District.

He said the directorate had notified the Assembly about the acute shortage of furniture in schools since it was responsible for providing educational infrastructure and logistics and appealed to the Member of Parliament (MP), Mr. Abddul-Rauf Tanko and Non-Governmental Organisations to help save the situation which was adversely affecting academic work.

Mr. Mohammed Musah, Deputy District Director of Education said they were fraught with a myriad of challenges in education and that lack of furniture was only the ‘tip of the iceberg’.

He said the situation in the hinterlands was even worse and required urgent steps from all stakeholders to address them.

He disclosed that even the education directorate mandated to supervise and coordinate education activities in the District was distressed as it lacked the logistics and human resources to work effectively.