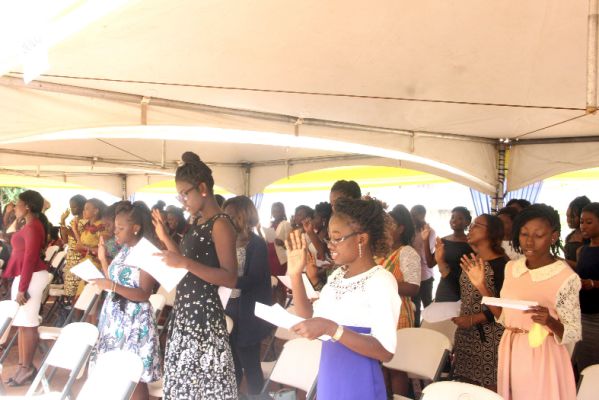 The acting Registrar of the Ghana Institute of Languages (GIL), Mr Prosper Agordjor, has observed that the current system of selecting students under the university admission process undermines the potential of many students to pursue university education.

He said many students were denied admissions into tertiary institutions, particularly public universities because the system was too demanding and for that matter many students were unable to pass courses which had very little to do with their major chosen field of study.

“We are frustrating the students and cutting some people out of life, the pass mark is worrisome because D7 in mathematics for a language student should be enough to grant them admission and same can be said of a vocational student with D7 in English,” he stated.

Mr Agordjor expressed this concern when  he spoke to the Daily Graphic on the sidelines of the GIL’s 17th matriculation in Accra on Friday, November 2, 2018.

The GIL admitted 73 students out of the 128 applicants this year to pursue a Higher National Diploma (HND) in the School of Translators (SOT) and Degree in the School of Bilingual Secretaryship (SOBS).

They will take courses such as English, French, Arabic, Chinese, Portuguese, Spanish, German and Russian.

As a solution, Mr Agordjor called for a review of the present system by the respective institutions to give students the opportunity to build their lives.

He expressed serious concern about the inadequate infrastructure and human resource at the institute, and said it was one of the reasons why the school was unable to increase its admissions.

Mr Agordzor said about 40 per cent of the school’s staff were part-time teachers employed and paid by the school, stressing that the situation was worrying.

The Head of SOT, Mr Isaac Osei, for his part assured the matriculants of an excellent experience  at the institute and advised them to make the best out of their time.

Mr Osei also urged them to use the right channels for conflict resolutions and advised them to “refrain from acts of indiscipline and work hard.”

0 responses on "Tertiary Institutions Urged to Review mode of admissions"