THE COVERT OR OVERT MEANS: WHICH DO YOU PROMOTE? 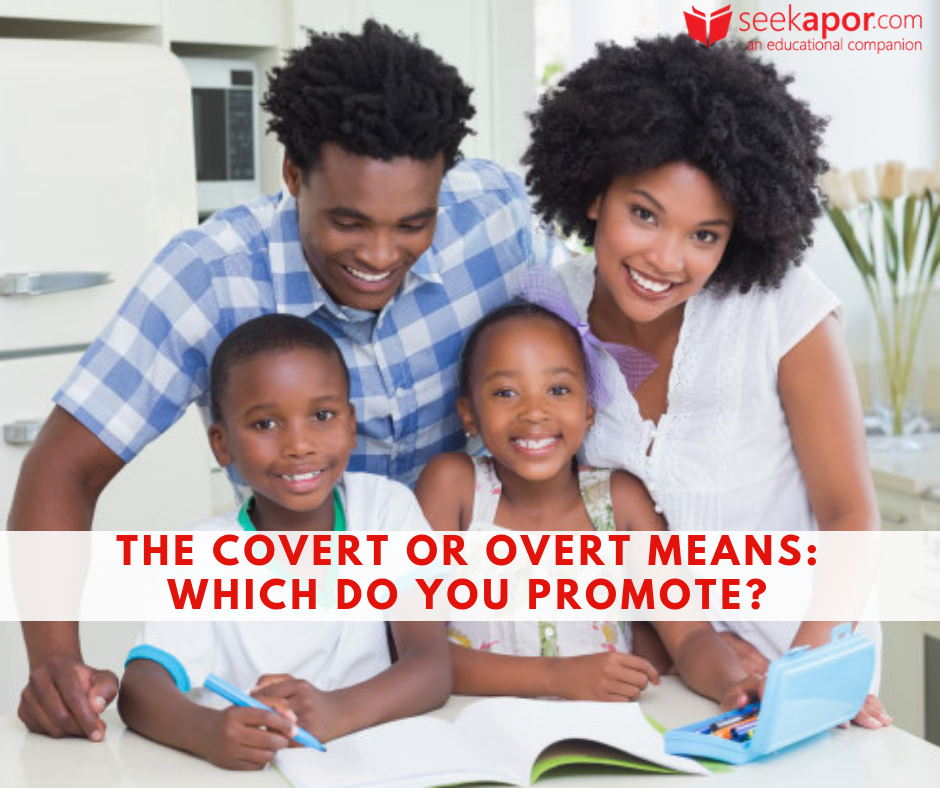 I attended a teen’s party over the weekend. Amidst the laughter, teasing, good food, and fun games, I learned a lesson as a parent. Healthy fun comes with some good memories and unconscious learning but that is not the main lesson I took from the party.

I learned that as parents, our responses and actions lead our children to behave in ways we did not intend to promote. I arrived at this conclusion after listening to a recount of some events by the teens. Permit me to share some with you.

Nana Yaa told us about how easily she got permission from her mother to step out with her friends when she told her mother who her friends were, where they lived, how they were commuting to their location and when they intended to return. She added that her mother usually admonished her not to drink, to be careful, to be observant through the ride to and fro and return by a certain time.

Her father, on the other hand usually got half -baked stories or blunt lies because she had studied that over the years, anytime she told him the truth about where she was going, he usually denied her permission. Thus, while mummy knew the truth, daddy did not. Her father usually bought the stories of her going to check out a new bookshop, a book launch, a visit to her cousins whom he dotted on or a church programme. With that she was sure to be allowed.

Bambie and Barbara, the twins of the family had experiences to share too but the long and short of it was that both parents were not privy to anything about them because they were not allowed to go out by themselves. So they looked forward to holidays at the Smith’s because their parents allowed them some ‘luxury of relaxation with friends’. As they put it, “Our parents say that till we are twenty-five, we are not allowed to go out unaccompanied. If we needed to go see a movie, it was with a parent. Thank God we made it to the university. Our weekends are freaky, funky, free and cool. Even our Thursdays are a bomb. So, yes our parents are right; vacations are for rest and not for roaming so we give ourselves a break and do all our chilling when school reopens”.

Thirteen-year-old Kwei retorted that he was definitely going to study hard to make it to the University so he can enjoy some freedom and luxury.

But Abi who was eighteen said her parents knew all her friends, the places she hangs, advise her when she gets into trouble, allow her to take some risks, attend social events and volunteer with social groups.

Looking at the gathering, I realized that Abi was the more confident child, the most trustworthy and rounded teen. This was evident in how she spoke, her mannerisms and how freely she gave out information. I cannot say if it was because she was allowed to take certain opportunities. Not that the other children had gone astray though because they all seemed level –headed apart from wanting to catch some breath away from their parents scrutinizing eyes.

The lesson is this, as parents, we should define our parenting styles and choices and be sure that they are best for our children. Whichever choice we make goes a long way to affect the relationship we have with our children. The covert child puts a wall between you and them and it is usually very difficult to break. They conceal and shelter everything from us. By so doing, parents do not know who their children really are to advice, guide and correct them where necessary because they present to us a pseudo- copy of themselves.

The overt child, on the other hand, is open, not hidden, free and observable. Such children’s needs and flaws can be easily identified and addressed. They grow in confidence, they are smart and responsible.

It is not only in granting children permission to go out, as seen in the examples above that promotes an overt or covert child. How parents react to their questions, how they scold them, what they expose them to and generally, how they speak to them promotes their being open or otherwise.

Therefore, the next time a ten-year-old child asks you how babies are born, do not shout at them or call them naughty children. Rather, answer them as truthfully as you can. If not, you are pushing them to wrong sources of information and teaching them to never ask you vital questions. This is also by way of example.

0 responses on "THE COVERT OR OVERT MEANS: WHICH DO YOU PROMOTE?"