The Rain That Came and Caused My Ruin 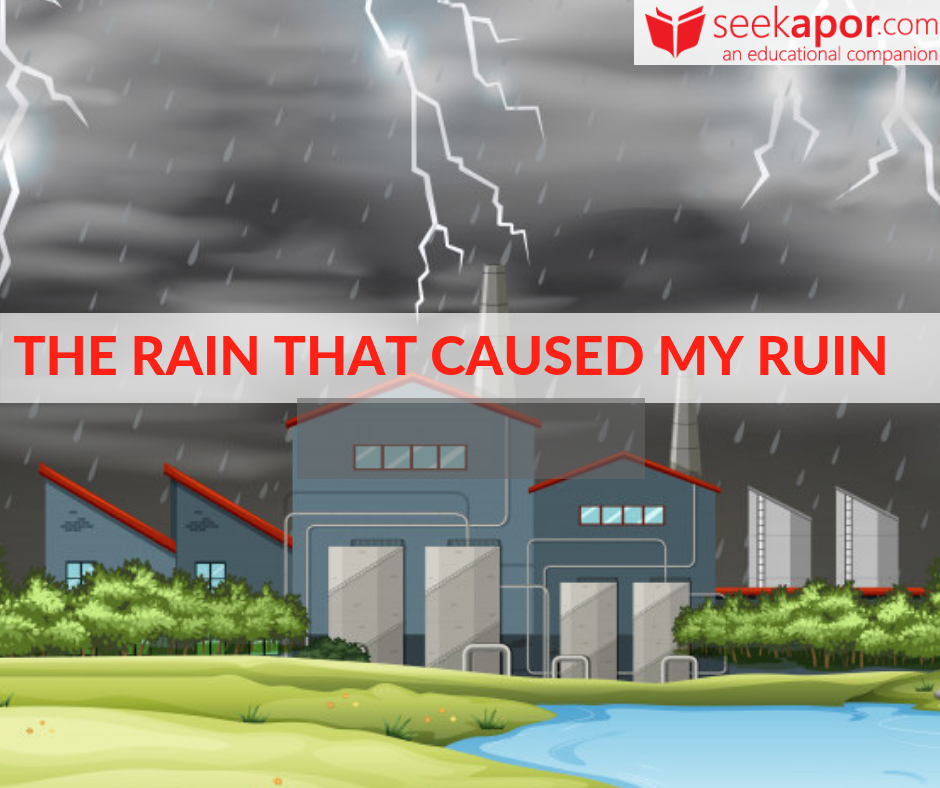 Education, they said was the best investment anyone could have. It was an investment with little risk so far as you took your studies seriously and made the most of it. As you can imagine, my parents did not forget to hammer this anytime they set to pay my school fees. They believed this assertion to the core and they channeled the majority of their funds into educating us. My mother, after my father had given his ‘sermon’ will sort of summarize all that has been said with this; “you have heard all that your father has said. It is for your own good that you learn because what you learn is yours forever, no one can take it from you.”

My school certificates and the ones I had attained doing short courses were the only valuables I had thus were my priceless possessions. I had it hidden away in my belongings but brought it out of hiding so I could hurriedly reach for it when my mother called for them. Every now and again, she called for my sister and I to bring our certificate to show to a relation or friend of hers whom she felt needed to have a peak at our success story. I chose to think of it that way than to think she was mocking her friends who thought they were giving too much attention to our education to the detriment of her social appearance and condition of our house.

After a couple of months of serving at The Ministry of Sustaining the Value of the Cedi, I was given permanent employment. The pay was good and life seemed promising. I enjoyed the roles I played but most of all, I enjoyed the times I spent chatting with Laura, my office crush with the killer body and captivating smile. That Secretary also added some spice to my days with her cheap flirtations. Rumour had it that during her free time, she went through the file of staff and depending on your qualifications, she treated you in a nice way because you were on your way to becoming Director –in-charge. One of the pastors on radio calls it strategically –positioning- yourself –to- affiliate- with- success.

After three years, I will be due for promotion. Even though staff were due after a number of working years, it was not automatic. You needed to go through an interview process and then successful candidates were promoted. Staff had two attempts to attend this interview. A second failure meant you will be stuck at your position forever without an upgrade but you will benefit from 1% salary increment every now and then. This initiative was introduced by the new Minister to keep staff of the Ministry on their toes. Never mind that he knew this will spark some controversy and accord him some media attention to get more popular as he was eyeing presidency.

Was I worried about this new strategy? No! Not at all. I had come top when I attended the interview because not only did I have the qualifications, I had read and learned all I needed to know about my job and appeared as sharp as sharp could be.

The date for the promotional exams was almost here and I had planned to surprise my parents with a pricey gift when I received my salary as a top management staff. I pulled out my certificates and dusted them clean weeks earlier. I had heard stories of how some people had been disqualified because they could not provide their necessary documentations. I had to make sure I had them all- from nursery school through to my first degree and some. It had been raining heavily and continuously in three days. The only effect I thought that came with was the fact that our electricity was cut out anytime the clouds began to gather.

Oh! How wrong I was!

In came another strong wind that threw the roof away

The rain, it poured in and took possession of the house through my room.

When we needed the power off, it stared at us.

It gave us the chance to witness clearly, the washing away of our furniture, our gadgets and more.

My father wanted to make for what he could reach.

Within a twinkle, we were shocked to hear him scream at the electric shock he had just received.

The current threw him towards the wall and that sort of revived him.

I made my way to the main switch and turned off the power to the house. Sensing some sense of safety, we created a path for the water to flow and gathered the few things we had in place. I then remembered my certificates. They had been lying on the table. My God! They must have been one of the few things that got destroyed. The photocopies were obviously gone too. How was I going to face the panel the following day?

I wept like I had lost a loved one. Well, I had. I wept that I had believed that no one could take my certificates from me. My mother consoled me with the fact that I still had it all in my head and I could wow the panel without certificates. I was sorry that I mocked someone for saying he had lost his certificates in a similar rain at Alajo.

The day of the interview came and I went looking sharp as before but forcing my smile.

“Can we have the original copies of your certificates, Mr. Anum?”

“Sir, I am sorry I do not have them now. Can I please be given a few weeks to reapply for them as the rains caused a disaster in my house?”

–          This rehearsed line was to work. I had practiced it with everyone I believed could make meaningful input.

“Oh so sorry to hear. That is sad. That rain broke my wall too. Anyway, Mr. Anum, come back for the interview when you successfully get new copies of them”.

“Secretary, call in the next candidate”.

After a year of trying to get new copies, I have given up. I will explain later. But I have given up. I made another fruitless attempt to be interviewed and I got the same response. My life, which seemed to be on the right track, has taken a wrong turn and I do not know how to rectify it. I wish to change jobs because I am grumpy and envious of how my mates and juniors are climbing up beautifully. But again, how do I apply when I have no qualifications?

Voice on Radio: In last Sunday’s rain, 12 people were reported missing and all attempts are being made to find them. In the meantime, everyone is being advised to ensure that they are safe. In doing so, we must do well to protect our environment so we do not keep hearing of people being displaced and the loss of lives. Do not litter, do not build in waterways. My name is Zarina Abdallah and I am reporting for S – News.

My name is Vincent Anum and the rain caused my ruin.

0 responses on "The Rain That Came and Caused My Ruin"