The story of how my genital was mutilated 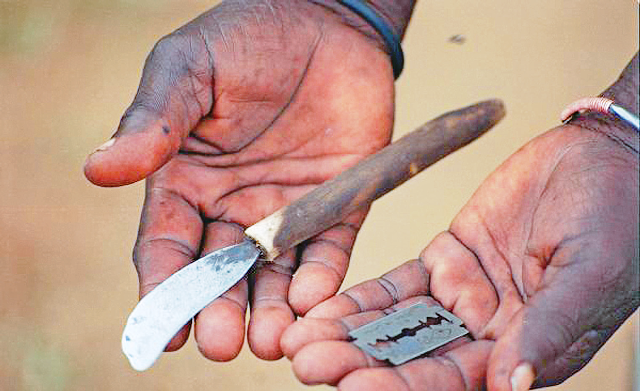 I was not ‘cut’ early enough. Girls in the community where I grew up typically have their sexual organs cut between the ages of 5 and 7. My mother knew it was mandatory to take me to Maa Adobi, the woman most girls my age dreaded because she was the expert in female genital cutting in our community. My mother, though had been through the process herself could not stand the thought of seeing me feel the pain of getting my clitoris cut off.

As a result of this fear, the cutting of my clit was delayed until I was about 15. How I wish it was done earlier. At 15, my senses were fully aware of what pain was, and even the thought of it was terrifying. My mom tried to hide the worried look on her face as she told me it would only take a few seconds and it would be all over, but I wasn’t convinced. All the girls my age (some whom were my friends) would go on and on about how excruciating the pain was. Most of them were bedridden for weeks after their ‘cutting sessions’. I wanted to run away. A day before the cutting, it felt like I was on a death sentence, waiting to be executed the next day. I barely ate or spoke to anybody. That night was the most terrifying night of my life. After my mom fruitlessly tried to talk away my fears and managed to convince me to go to sleep, I spent the rest of the night crying and seeing strange images in the dark as I lay on my mat. That was probably me losing my mind.

Fast forward to the D-Day. Girls in my community are usually ‘circumcised’ in the mornings, so I was scheduled to have mine done in the morning just like everybody else. I was weak from my hesitance to eat the previous day and I even refused to take breakfast that morning. I remember vividly what I was wearing. It was a white dress my grandmother gave me as a present for my 15th birthday (who would wear such a beautiful dress for such a gruesome experience?). The dress was my mother’s choice. She knew how much I loved it, and wanted me to feel better wearing it. Honestly, it just made me cry more. I wondered why I would look like a princess when I was actually going to be harassed like a slave.

The walk to Maa Adobi’s house was the shortest walk of my life. I wanted to spend forever walking. I observed my mom hiding something in her cloth, but I knew what it was. I had seen and heard enough to be naïve. It was the razor blade that wicked Maa Adobi requested to use in cutting me. My heart raced faster as we approached her house. Lo and behold, Maa Adobi was standing outside with a broad smile. By this time, I had started crying and wailing. I probably cried more than the 5-year-olds who were taken to have their cutting done. My mother and Maa Adobi tried to calm me down but I just wasn’t ready to be abused.

Then the moment came. When they gave up on waiting for me to cooperate, they had to make a way. With my mom looking on helplessly, two strong women dragged me into the room. Two other women who were already in the room held me by my legs. I was struggling for freedom but those women were too strong and skilled in dealing with stubborn girls like myself. What even terrified me was when they began to tie my hands with an old cloth . I was exhausted even before the cutting started. Remember I was weak because I avoided food for almost two days? My legs which were spread apart got so tired that I had less control, it felt like I was dying.

Suddenly, I felt a hand holding my clit and the whole room became dark in my eyes, as I felt a sharp pain. The pain kept getting more and more intense. I could not breath and my head was exploding. I started feeling cold and numb, and I could feel my buttocks getting wet from my blood. It was terrifying.

I do not remember what happened next. Apparently, I passed out and was rushed to the traditional healer who lived close to Mama Adobis house and handled such casualties. That experience is a story for another day. Most of what I remember is the painful herbal mixtures that were constantly applied to my sore vagina.

I’m 30 now and that experience still flashes back just like it was yesterday. I have battled infections and trauma even in my adult life. Worse of it all, I do NOT know what sexual pleasure is. Yes, I’m married with three children, but I only feel like a baby making machine. Sex is painful, pregnancy is another story and delivery is excruciating and always comes with complications.

Nobody should ever experience what I went through. Nobody.

Let me know if you had any such experiences by sharing them with me in the comments section.

0 responses on "The story of how my genital was mutilated"