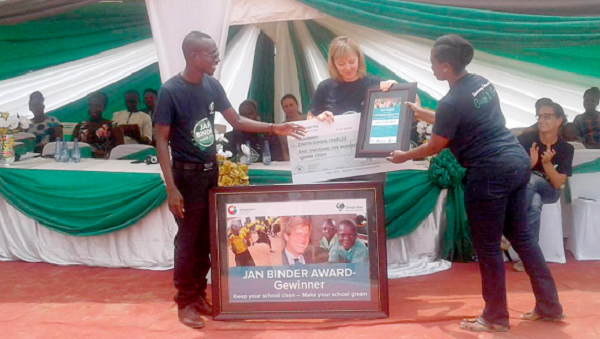 Three private schools in the Ashanti Region have been presented with awards for coming tops in this year’s Jan Binder Green Environment Project. The three schools are out of 600 private schools.

A ceremony to present the awards to the schools took place at Feyiase in the Bosomtwe District in the Ashanti Region.

The scheme which was established four years ago had the three winning schools receiving cash, citations, plaques, and gifts for their efforts.

For being first, Davita School Complex, at Feyiase in the Bosomtwe District received GH¢5500, a citation, a plaque, and a gift.

Justhope Educational Complex, from Ejisu in the Ejisu Municipality, placed second and was presented with an amount of GH¢3300, a citation, a plaque, and a gift; while Akadol Standard School Complex, at Asuofua in the Atwima Nwabaigya district came third and was given GH¢2200, a certificate and a gift.

It seeks to encourage school pupils to develop an interest in protecting and maintaining clean and green environment at all times.

Jan Binder was a young German staff of Opportunity International, in Germany who visited Ghana whenever he was on holiday. He went swimming in 2012 in Cape Coast and got drowned.

After his death, his mother, Martha Binder, a medical practitioner, instituted an award scheme out of the love she had for her son and in fulfillment of her son’s dream of promoting ‘a clean and green environment’ at all times in Ghana.

She goes around with a bicycle in Germany to raise funds to promote her son’s lifetime dream.

The award scheme entails inspecting the compounds of the participating schools by a monitoring team that also checks their sanitary conditions and how green and clean the school’s surroundings are.

He said besides the prizes presented to the winning schools, the schools were also given cash to develop their institutions.

Mr Opoku-Ahene said it was good to support children to keep their environment clean and green at all times since the habit could become a part of them.

“Ghana has many challenges with sanitation, as such the need for continuous education to keep the environment clean and green”.

“All must, therefore, work hard to complement the efforts of the government at attaining the goal of keeping the country clean,” he said.

The Programmes Manager of Opportunity International Germany, Ms Anke Luckja, said the organization would continue to deepen its collaboration with Sinapi Aba and to get many children and the society in general to respect the environment.

She expressed her worry over the unsanitary conditions in the country and called for more to be done to improve sanitation management which could pose a great health risk to the people, if not checked.

She said exposing children early in their lives to proper hygiene was very important to enable them grow with the habit.