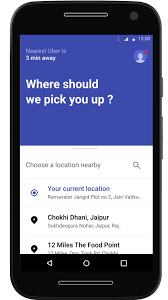 Uber has launched Uber Lite, a lighter version of its main app, which is aimed at emerging markets.

Uber Lite has a new interface was designed to make booking rides quicker and lighter in low connectivity, on basic Android phones, and for people with limited data plans.

Lola Kassim, General Manager for Uber in West Africa talked about the release of the app, “Many citizens within Ghana, actively use Uber to travel for various reasons. With consumers requesting better, lighter versions of their much loved apps, Uber Lite was created. The Uber Lite app is a redesigned Uber app, that uses less space and works better in low connectivity, while still delivering on optimacy when requesting a ride.”

What Makes Uber Lite Different From The Uber App

Editor’s Note: Uber Lite is not currently available in the GH Google App store. We’ll contact Uber for information when it will officially go live.