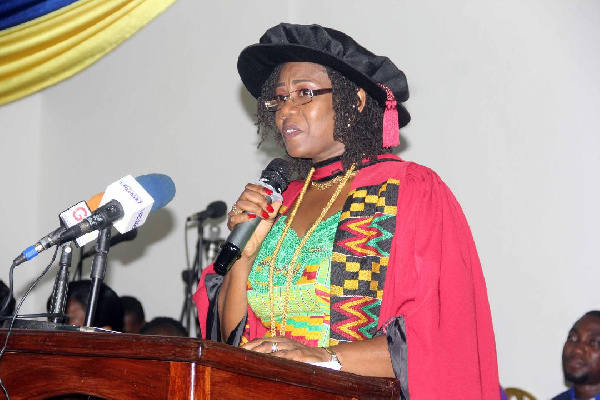 Dr Eureka Emefa Ahadjie Adomako, a Senior Lecturer at the University of Ghana has been inducted as the 17th warden of the Volta Hall of the University. She was inducted during the celebration of the hall’s 60th anniversary.

Dr Adomako, who is a Senior Lecturer in the Department of Plant and Environmental Biology at the UG was inducted to steer the affairs of the students of the Hall and enhance their academic, sports, leadership capabilities and welfare.

She was appointed and elected by the Governing Body of the Hall, inducted in office by the very Reverend Dr Maxwell Aryee and Reverend Francis Yaw Boamah and presented with a symbol of office by Mrs Christy Badu, the Immediate Past Warden to serve a three-year tenure which is renewable.

Dr Adomako, made vows to be mindful of the responsibilities of the office of the Warden, and be conscious of the essential functions of the University.

The functions she said, were to uphold the noble traditions of the Hall as established by her predecessors, promote sound learning, true religion and good discipline, ensure the welfare and fellowship of all fellows of the hall, observe the rules and regulations of the Hall without fear of favour and be diligent in her duties whenever duty called day or night.

Other Principal Functionaries of the Hall, thus the Senior Tutor, the Hall Bursar, the Presidents of the Senior Common Room and Junior Common Room, and Staff Representative reaffirmed their vows of office and pledged their support to co-operate with the newly inducted Warden to promote the development of the Hall.

In an interview with the media, Dr Adomako said her role was equivalent to that of an Executive Director and she was charged with many responsibilities including ensuring the maintenance of the Hall to give students a serene environment for studies.

She said together with her predecessors, they were able to solve most of the Hall’s structural problems before she was inducted, and noted that, they had a pending project called “The Volta Hall’s Women Resource Centre” but run out of funds.

She therefore called on all-and-sundry especially alumni of the Hall to come to their aid because the Facility when completed would not only be an asset for the Hall but for the entire University.

The Warden commended the older alumni of the Hall for their support towards the development of the Hall over the years and called on the young alumni to also join hands to support the enhancement and progress of the Hall.

“If you were my year group person, 1990, and afterwards, this is our time. Please let’s come on board and support the works of Volta Hall. I’m sure there are things that we can use to encourage the young people,” she said.

Dr Adomako explained that upon completion, female students could visit the centre for private times to execute an academic task and use it for research.

Dr Sylvia Boye, a Member of the UG Alumni Council, who launched the 60th anniversary said, Volta Hall had been a place of inspiration, a culture born and nurtured, adding that it had produced Chief Justices, Chancellors of Universities, Lawyers, Doctors, Lecturers and Administrators among other professions.

Dr Boye noted that the Hall which was established in October 1959 was a culture of hard work and academic excellence, therefore, the Authorities were going to ensure that their actions were in line with the vision of the Founders of the Hall.

She said the 60th anniversary programmes after the launch, would include the Hall week celebration in April, Alumni Pubic Lecture, Fund Raising, health walk, fun games, Home Coming, and thanksgiving service which would be the climax of the celebration.

The launch was embellished with cultural displays, cutting of anniversary cake, fireworks, and dinner.